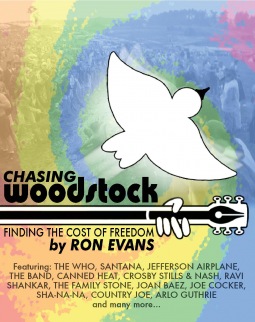 Chasing Woodstock is written by Ron Evans, who happened to grow up in the town I was born in!  Ron did not attend Woodstock, but ended up receiving a program from the concert festival and it ends up taking him on quite a journey!  Ron decides that he is going to get the program signed by artists who performed at the festival while trying to never let the program leave his sight.  This book recaps the meetings and some of the road blocks along the way in trying to meet his goal.

This book was a really neat read, especially because Ron lives so close to me so a lot of the venues he was talking about are near by and ones I have even attended shows at myself.  I applaud him for the dedication he put in to his project – most of which was done before the internet and smart phones were in everyone’s pockets!  This project has been going on for longer than I’ve been alive – which is just crazy to think about such dedication to a project!

During the summer of 1969, approximately 500,000 people traveled to upstate New York for Woodstock, a three-day long music festival, designed to celebrate peace and love. However, times in America were anything but peaceful. The country was divided by an increasingly unpopular Vietnam War, and protests were growing. Meanwhile, large numbers of teens and college students rejected the cultural norms of their parents and the 1950’s; campaigning passionately for civil rights, fighting discrimination, and demanding equality for all Americans regardless of race, gender, or social status.

In his debut book, Chasing Woodstock: Finding the Cost of Freedom,author Ron Evans provides an inside look at how the summer of 1969, Woodstock, and its music changed his life forever. His curiosity was first piqued when, through a simple act of kindness, he received a rare artifact from the festival. With an insatiable thirst for discovering the truth behind America’s loss of domestic tranquility, Evans takes his readers on the quest of a lifetime. He shares never before heard stories, exclusive interviews and photographs; transporting his readers backstage, on stage, off stage, and into the dressing rooms of the greatest and most prolificrecording artists in history including: The Who, Santana, Joan Baez, CS&N, Joe Cocker, and many more.