June 5, 2014 by ConcertKatie No Comments 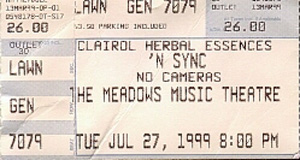 I’m actually reading my old review from just after the show to refresh my memory. I’m not quite brave enough to post THAT review haha but there were 2nd stages and apparently Michael Africk and INOJ played on the side stage. I do not have any recollection of this whatsoever, nor do I know who they are so they must have gone quite far… The Rosie O’Donnell show was also a big deal back in 1999 and she had a kid named Colin on a lot.  I thought I saw him outside before the show and my mom told me it wasn’t him – and then he ended up on stage later and it was him.  I was not at all interested in the opening acts (I guess some things will never change) until Jordan Knight performed. We were on the lawn so we didn’t have all that great of a view and after the show we went by where the buses were leaving and I am pretty sure Chris looked out the window at us. (In fact years later I am still pretty sure that was Chris.)

Sugar Hill Gang – According to Wikipedia, they were no longer active after 2007.

Jordan Knight – reunited with NKOTB in 2008, working on a solo effort Nick and Knight with Nick Carter of the backstreet boys

NSYNC – on indefinite hiatus, though briefly reunited last summer for the VMAs.