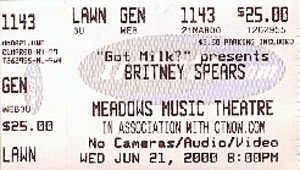 We got to this show late and I remember the cop telling my friend’s mom that “she’s never going to make it” when he told us we couldn’t park close and she asked to get closer because I was disabled.  Funny how that completely unneeded comment still sticks out in my mind, 14 years later.  Well, guess what dude, I did end up making it to the venue without a problem.  We did miss part of No Authority but made it to the back of the lawn by the time BBMak hit the stage – who was one of my favorites back in 2000!  I remember more about the people around us for this show – peeing on a tree in the corner of the lawn – than I do about the actual show.  We had to watch most of it on the screen.  I think it was after this show I had sworn off lawn for any future shows.

No Authority doesn’t seem to have a wikipedia page. But I think it’s safe to say they broke up as well.