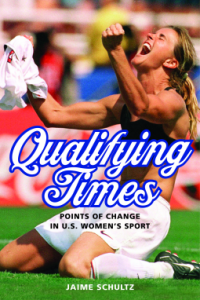 Qualifying Times talks about the evolution in Women’s Sports and what certain things were considered a point of change.  Things that don’t seem to be significant now – such as a ponytail and what women wore to play tennis in. (Which now are a bit more provocative than the outfits that originally were considered a “big deal”)  It focuses on items such as a sports bra and the tampon – which were also big deals in the beginning but now just kind of come with the territory.   Certainly an interesting read and it is amazing what things were considered big issues at the time and are now just normal and everyday way of life things.

Beginning with the seemingly innocent ponytail, the subject of the Introduction, scholar Jaime Schultz challenges the reader to look at the historical and sociological significance of now-common items such as sports bras and tampons and ideas such as sex testing and competitive cheerleading. Tennis wear, tampons, and sports bras all facilitated women’s participation in physical culture, while physical educators, the aesthetic fitness movement, and Title IX encouraged women to challenge (or confront) policy, financial, and cultural obstacles.

Ultimately, Schultz finds that U.S. women’s sport has progressed significantly but ambivalently. Although participation in sports is no longer uncommon for girls and women, Schultz argues that these “points of change” have contributed to a complex matrix of gender differentiation that marks the female athletic body as different than–as less than–the male body, despite the advantages it may confer.

Jaime Schultz is an assistant professor of kinesiology and women’s studies at Penn State University.