Book Review: I’ll Take You There 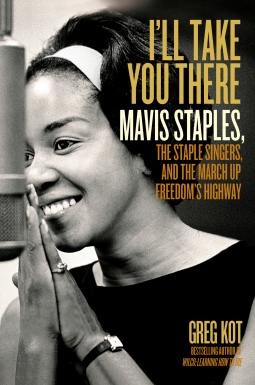 Before reading this book, I have to admit the only thing I really knew about the song “I’ll Take You There” was that Britney and Justin had performed it on MMC.

After reading this book I know a lot more about the Staples Sisters and their career and lives.  The book is considered a biography but is made up with a lot of information coming from the surviving sisters in interviews with the author. There are a lot of direct quotes throughout the book of the sisters remembering the times that they were talking about in the interviews.

The Staples Sisters were around in the civil rights era and they even were supposed to be at an event with Martin Luther King Jr the day after he was killed. They also have stories about working with Bob Dylan and Prince among many other talents.

Another thing I thought was interesting was that their dad, who they refer to as “Pops” was named Roebuck and his brother was named Sears!

This was a very well done biography with a lot of information straight from the source. A lot of ups and downs in their career and they did a lot of great work for Civil Rights.  Definitely a worthwhile read!

This is the untold story of living legend Mavis Staples—lead singer of the Staple Singers and a major figure in the music that shaped the civil rights era. Now in her seventies, Mavis has been a fixture in the music world for decades. One of the most enduring artists of popular music, she and her family fused gospel, soul, folk, and rock to transcend racism and oppression through song. Honing her prodigious talent on the Southern gospel circuit of the 1950s, Mavis and the Staple Singers went on to sell more than 30 million records, with message-oriented soul music that became a sound track to the civil rights movement—inspiring Martin Luther King Jr. himself.

Critically acclaimed biographer and Chicago Tribune music critic Greg Kot cuts to the heart of Mavis Staples’s music, revealing the intimate stories of her sixty-year career. From her love affair with Bob Dylan, to her creative collaborations with Prince, to her recent revival alongside Wilco’s Jeff Tweedy, this definitive account shows Mavis as you’ve never seen her before. I’ll Take You There was written with the complete cooperation of Mavis and her family. Readers will also hear from Prince, Bonnie Raitt, David Byrne, Marty Stuart, Ry Cooder, Steve Cropper, and many other individuals whose lives have been influenced by Mavis’s talent.

Filled with never-before-told stories, this fascinating biography illuminates a legendary singer and group during a historic period of change in America.