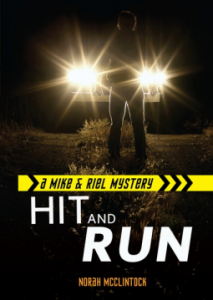 Hit and Run is the first book in the Mike and Riel Mystery Series.  I guess I should have looked at that title and figured out what may end up happening in the book but that thought didn’t cross my mind until I was finished.  When the book first starts we meet 11 year old Mike.  He lives with his mom and every now and then his Uncle that his mother helped raise shows up as well.  That is until Mike’s Mom is hit by a car and killed. Uncle Billy, 10 years older than Mike, becomes his guardian.

Things seem to be going alright, until Mike starts getting in trouble at school because his History teacher sent him home to retrieve a paper and Mike decided to just take the rest of the afternoon off from school. Turns out that Mike’s history teacher used to be a cop and was the one on the case of his Mom’s death.  When Mike starts asking questions, things start happening… Mr Riel realizes that one of Mike’s Mom’s friends wasn’t questioned about seeing her the night of her death.  He tells Mike that he will have a cop look in to things, but Mike talks to her himself and gets a  clue he can’t quite figure out.  When Mike and Mr. Riel show up later, it seems like the woman has had a stroke and she ends up dying.

Thinking they are at a dead end, Mike again talks things through with Mr. Riel and ends up coming home to tell Uncle Billy about his thoughts.  Uncle Billy asks for Mike to stop asking questions and admits that he may have had something to do with the car that hit his mom disappearing after it was stolen.  Mike doesn’t want to tell anyone about this because his Uncle asked him to stop looking for answers – but when Uncle Billy shows up dead of an apparent suicide, he tells the cops all he knows.

Was his Mom’s death an accident or was it a hit and  run?  Who was responsible?  Mike and Mr. Riel try to see if they can figure it out.

I love a good mystery and I have to say that this book did keep me guessing at who really did it.  I had some sinking suspicions that kind of sort of ended up being right but for the most part I was as blindsided as Mike was once he pieced everything together.  As this is a Young Adult book it was a relatively quick read and an easy read – with a lot of other sub plots going on with Mike and his friends at school and his girlfriend as well.

Definitely recommended for a Young Adult who loves Mystery.  I am looking forward to hopefully checking out some more books in this series.

Fifteen-year-old Mike McGill has lived with his Uncle Billy since his mother’s death. Only ten years older than Mike, Billy loves to party, and he doesn’t pay much attention when Mike starts getting in trouble. But nothing gets by Mike’s history teacher, an ex-cop named Riel—especially not long-hidden information about Mike’s mother. Her death might not have been an accident after all!