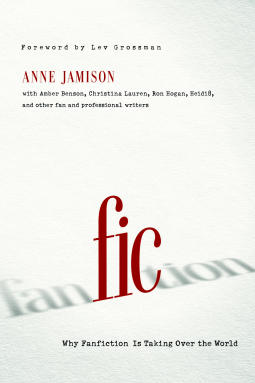 Fic is all about Why Fanfiction Is Taking Over the World.

It’s quite interesting.  I feel like since the success of Fifty Shades of Grey, FanFiction has become more mainstream.  I mean, I grew up reading (and sometimes writing) Hanson, NSYNC, etc fan fiction.  The book talks about how sometimes the stories never were done.  I know half of mine never finished.  Sometimes you’re reading along to someone else’s story and then that’s it, it’s done. They’ve given up on it, moved on to a new story or maybe a new band or tv show or book all together.

One of the chapters talks about how some people think it is “stealing” to write fan fic – while others call it “borrowing someone else’s toys”.  I think it’s a lot easier to write based on characters you are already (somewhat) familiar with than it is to make up your own characters all together. Maybe that means I am not creative, maybe it’s just a technique that works for me (and others.)

The book features interviews with over 20 authors with their thoughts on fic.  It is always interesting to see what other topics have spawned a community through fan fiction.

One of the sections of the book is about Harry Potter fiction.  Back when I was in college my friend used to send me stories to read by her “favorite author”, Cassie Clare.  She’s now known for writing the Mortal Instruments series – which is being turned into a movie.  A lot of times I think – hey, I can write a good book if I start it as fan fic and then change the characters.  Then I never follow through.  I’d be a millionaire if I wasn’t so lazy 😉

This book is almost 500 pages – so it is relatively long, but I found it to be very interesting and I liked reading the interviews from other fiction writers and the in-depth analysis of the genre and why it is probably not going away anytime soon.

If you are a fanfic reader or writer, you will probably enjoy reading this book, as it has a lot of good information in it. I was surprised to know that fic has been going on since 1960 – there were ‘zines dedicated to fiction based on star trek. I guess I should have figured it had been going on for a lot longer, but I can only imagine the impact that the internet has had on being able to quickly and easily share fic and be able to build a community. (The book does of course touch on this topic a bit as well.)

What is fanfiction, and what is it not? Why does fanfiction matter? And what makes it so important to the future of literature?

Fic is a groundbreaking exploration of the history and culture of fan writing and what it means for the way we think about reading, writing, and authorship. It’s a story about literature, community, and technology—about what stories are being told, who’s telling them, how, and why.

With provocative discussions from both professional and fan writers, on subjects from Star Trek to The X-Files and Buffy the Vampire Slayer to Harry Potter, Twilight, and beyond, Fic sheds light on the widely misunderstood world(s) of fanfiction—not only how fanfiction is transforming the literary landscape, but how it already has.

Fic features a foreword by Lev Grossman (author of The Magicians) and interviews with Jonathan Lethem, Doug Wright, and Eurydice (Vivean Dean).