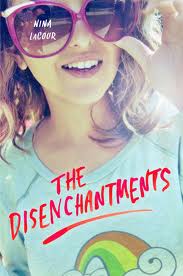 This month I participated in The Good Groupie’s Rock Novel Reading Club and read the first book that she had chosen for us to read – The Disenchantments.  Obviously I love to read (as seen by the probably far too many book reviews on this blog) and if it is a music book then that is even better!

The book tells the story of 4 friends.  Each of them seem to have a different dynamic with each other, which made things interesting.  There is Bev and Colby, best friends though of the opposite sex (so you know what that probably means) and sisters Alexa and Meg.  The girls are in a band called “The Disenchantments”.  After the older 3 graduate high school, they decide to go on tour up the coast with Colby driving his Uncle’s VW bus.  They’ll play a few shows along the way and ultimately drop Meg off at her college.

The plan is then for Bev and Colby to travel to Europe to see Colby’s Mom who is in France – and check out a bunch of other places as well.  The two seem to have things all planned out and have been planning this for years – until Bev drops a bomb on Colby.  She applied to college when he didn’t, got in to RISD and plans to attend in the fall.

Colby has trouble dealing with this news and isn’t sure what he should do.  Go to Europe alone? Try to get in to a college for the Spring semester?

Meanwhile there are some sub-plots as well – mostly centering around a tattoo that someone got done at a parlor they stumbled upon in their travels of the album art that Colby’s Mom had created for Colby’s Dad and Uncle’s band.

The book can be frustrating at times – but I think that is on purpose and because these characters are just kids – just graduating high school and not knowing exactly where there life is going to take them and what exactly they want to do with their lives either.  I really enjoyed all the characters – the main 4 and everyone they met along the way – as well as all the descriptions of the venues that they are playing on their ‘tour’.  It made me want to hop in the car and go on a road trip. (Until I remembered I have no one to go with and I can’t spend that much time alone with myself and my thoughts in a car!)

The Good Groupie also has posted some discussion questions – I’m not sure if I’ll post my thoughts about them here, I’m still thinking about my answers 🙂

(I purchased this book in order to participate in this Rock Novel Reading Club. I was not otherwise compensated and wanted to share the book with my readers)

Colby and Bev have a long-standing pact: graduate, hit the road with Bev’s band, and then spend the year wandering around Europe. But moments after the tour kicks off, Bev makes a shocking announcement: she’s abandoning their plans – and Colby – to start college in the fall.

But the show must go on and The Disenchantments weave through the Pacific Northwest, playing in small towns and dingy venues, while roadie- Colby struggles to deal with Bev’s already-growing distance and the most important question of all: what’s next?

Morris Award–finalist Nina LaCour draws together the beauty and influences of music and art to brilliantly capture a group of friends on the brink of the rest of their lives.