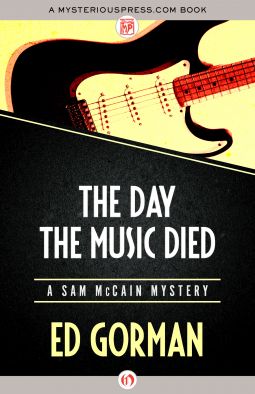 The Day the Music Died is a Sam McCain Mystery. Sam is a lawyer, but in a town where there’s more than enough lawyers, he also works as a private eye to try and make some extra money. The title – The Day The Music Died – is of course the reference to the death of Buddy Holly, Ritchie Valens and The Big Boppers deaths. The book starts with Sam going to see Buddy Holly perform – what would end up being his last performance. Sam is a big fan of Buddy Holly but he has no time to grieve the death of his idol because immediately he is submerged into what appears to be a murder-suicide. But Sam thinks that there may be more to it and that the husband did not murder his wife.

Sam ends up diving in to the mystery and tries to figure out what it is that really ended up happening.  There are a lot of interesting characters in this book and it was certainly a good mystery read. I was a bit thrown with the title though – I thought at first that it would be investigating the deaths of Boddy Holly, Ritchie Valens and The Big Bopper – instead of their deaths having just a small part in the story.

This is the first in a series and the rest all seem to have more music titles, I’m sure I’ll check them out in the future if they cross my path. I did enjoy the writing and the story that the book ended up being.

I received a free e-copy in order to write this review.  I was not otherwise compensated.

About the Book
In 1950s Iowa, a murder-suicide forces a lawyer to put aside his rock-and-roll grief

Sam McCain loves Buddy Holly because he’s the only rock-and-roll star who still seems like a dweeb, and Sam knows how that feels. With the unrequited love of his life at his side, Sam drives more than three hours through the snow to watch his idol play the Surf Ballroom. That night, Buddy Holly dies in the most famous plane crash in music history, but Sam has no time to grieve. Because there are too many lawyers in this small town, Sam makes a living as a PI, doing odd jobs for an eccentric judge—whose nephew, it seems, has a problem only a detective could solve. His trophy wife has been murdered, and as soon as Sam arrives, the nephew kills himself, too.

The police see this as a clear-cut murder-suicide, but Sam wants to know more, diving into a mystery that will get dangerous faster than you can say “bye-bye, Miss American Pie.”