Book Review: Hard Listening: The Greatest Rock Band Ever (of Authors) Tells All

September 19, 2013 by ConcertKatie No Comments 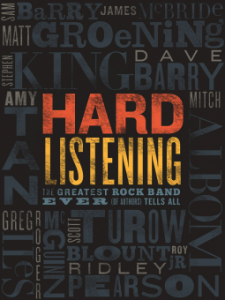 Hard Listening is a compilation of various authors candid emails, writings and photos.  It is stories about “Rock Bottom Remainders” which is a rock band formed by the world’s bestselling authors.  They recently turned 20 and put this book together.  They were more than a band – which was a good thing because they were not a very good band.

Certainly an interesting read because you would think that you’d see these authors at a computer or with a pencil and paper in their hands – not guitars!

It is nice to hear about it all from the band members themselves as well as check out the photos.  I had never heard about this band before and figured it might be amusing to read about them.  Based on the photos it certainly looked like they had quite the time on stage.

In 1992, a cadre of the world’s bestselling authors formed a rock band called the Rock Bottom Remainders. For two decades the band played proudly (and some would say, terribly) to sold out crowds across the country. Now they’re hanging up their guitar picks, drumsticks and leather whips, but not without a look back at twenty years of friendship, love, writing, and the redemptive power of rock ’n’ roll.