September 28, 2013 by ConcertKatie No Comments 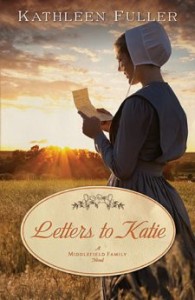 Letters to Katie is about an Amish girl named Katherine (Katie), who is getting to be a bit older and all of her friends are pairing off and having babies and she isn’t.  She has had a crush on local boy Johnny for years but she’s not sure that he likes her back.  Is it time to move on from him and find someone else? Or will he finally confess he has feelings for her too?  She ends up meeting an out of towner named Isaac at the restaurant where she works.  He likes her, but is going away with his father for a bit to look at alpaca farms.  He asks if it is ok for him to write letters while he is away and she agrees.

Meanwhile, Johnny asks Katherine to make a meal for guests that he is having over about a business proposal.  After Katherine makes the meal and cleans his house, he kicks her out because he didn’t want to have to explain who she was (ie, not his girlfriend) to the guests. Katherine is upset and ends up getting very ill with a headache in the days following.  Johnny shows up at the house unannounced and wants to talk to Katherine about things.  She ends up passing out and ends up in the hospital with meningitis.

Katie has memory loss – she can’t remember the past 3 weeks or so and has no idea why Johnny was at her house.  She also has no idea who this Isaac person is that keeps sending her letters.  Both of the guys are into Katie but who will she end up with? If either of them?

This was a good story, with a few twists and turns along the way.  You couldn’t help but feel for Katie and hope that Johnny would love her back.  Or maybe that she’d move on with Isaac once he showed up.  But then after she got sick everything changed and  then you weren’t sure how things would end up. But I am happy with how it ended and how everything turned out and I think you will be too if you check out the book 🙂

Everything changed between them the first time he called her Katie.

Katherine Yoder has loved Johnny Mullet since they were children, but he never actively returned her affections. Like so many things in their world, he assumes Katherine will always be there. Once his horse farm is a success, then he will court her in earnest.

For several weeks, Katherine has been plagued by severe headaches and dizziness. While resting at home, Johnny unexpectedly visits, but when dizziness strikes, she loses consciousness. She awakens hours later in a hospital bed, unable to remember how she got there.

Seeing Katherine injured and vulnerable stirs something in Johnny, and his guilt compels him to spend time with her while she heals. Soon his heart begins to stir with questions: Does she even remember why he’d come to her house that day?

As Katherine struggles to recall recent memories of Johnny, a surprise visitor arrives in her already unsteady world—a man named Isaac who claims they had been writing letters to each other, even considering marriage, before her illness.

With two men vying for her attention and her memory still elusive, Katherine has never felt so divided. The answer may lie behind a door she never considered opening.

Disclosure of Material Connection: I received this book free from the publisher through the BookSneeze.com® <http://BookSneeze.com> book review bloggers program. I was not required to write a positive review. The opinions I have expressed are my own. I am disclosing this in accordance with the Federal Trade Commission’s 16 CFR, Part 255 <http://www.access.gpo.gov/nara/cfr/waisidx_03/16cfr255_03.html> : “Guides Concerning the Use of Endorsements and Testimonials in Advertising.”