September 25, 2013 by ConcertKatie No Comments 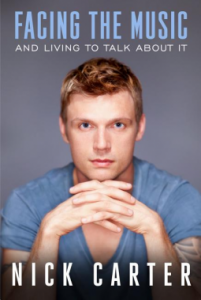 Facing the Music And Living To Talk About It is Nick Carter’s autobiography.  If you don’t know, Nick is the youngest member of the Backstreet Boys and had some struggles with addiction a few years back.  After his sister died of a drug overdose, Nick decided to write this book and mentioned that he wished he could have written it before she passed so that it could have maybe helped her.  Nick’s family is a bit dysfunctional and he talks about how his parents used to always fight and sometimes his dad would shoot a gun out the window when he was angry.  They’d often threaten to divorce and Nick felt it was his job as the oldest to try and protect his younger siblings.  His parents finally divorced when he was 26 years old.

The book focuses a bit more on his addictions than his time in the band, though he does mention how the band formed and that he had been offered to be on MMC but instead chose to go with Lou Pearlman and join the Backstreet Boys instead.  I was bracing for the worst with the chapter on Lou because I’ve heard some terrible things about him but the mentions were brief and mostly what I had already known about him.

While BSB was working on a new album, Nick was spiraling out of control – drinking all night and capping the night off with heavy drug use.  He mentions how he was often worried  that children or fans would recognize him in his zombie like state but that wasn’t enough to get him to seek help.  Finally though, he did realize that he was slowly killing himself and needed to do something to turn his life around.  And not only did he manage to do that, he is now sharing what helped him with others in hopes that they can help themselves as well. (There are several disclaimers that Nick isn’t a medical professional etc. but it’s more of just a what worked for him may work for you too or how to seek out the help you need.)

The book made me really proud of Nick – I am glad that he found help not only for himself but for all the BSB fans as well.  And that he is able to share all that he went through in hopes of helping other too.

This book is Nick Carter’s autobiography and self-help hybrid in which he chronicles his struggles with a dysfunctional family and the unimaginable rigors of becoming an internationally successful pop-star at the age of 12. From his battle with addiction to serious health complications and the pain of his younger sister’s tragic death, Nick leaves nothing to the imagination and offers true and heartfelt advice to help readers overcome obstacles in their own lives.