September 21, 2013 by ConcertKatie No Comments 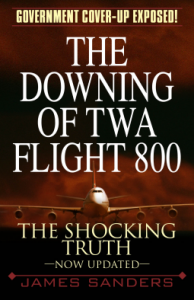 I remember all about TWA Flight 800. It happened by Long Island, so relatively close to me and a couple of days before my birthday.  It was all over the news for the longest time and I even thought about writing a book about it.  (I don’t remember all the details but I think it was going to be fictional and loosely based off of the events.)

The Downing of TWA Flight 800 puts forward some evidence that the plane was not taken out by a fuel tank explosion, but rather it was shot down by a missile.  There are a lot of different details in the book and I’m not sure what I believe but the book certainly made me think.

What do you think? Check out the book and let me know!

NOT THEORY—FACT!
A MISSLE SHOT DOWN FLIGHT 800!

It took federal investigators nearly and year and millions of tax dollars to point to a fuel tank explosion. But the investigation was riddled with questionable procedures. Was the government hiding a huge military embarrassment? Was the plane shot down by a missile?


Who launched the missile? How much did the government know and when? Was it simple bureaucratic incompetence or the most massive cover-up in U.S. history? Ex-cop turned acclaimed investigative reporter Jim Sanders exposed the shocking truth in 1997. Despite unremitting threats to his life, he has recovered even more evidence the FBI tried to suppress about the true history of TWA Flight 800.

Jim Sanders, an investigative journalist, is a retired Seal Beach, California, police investigator who specialized in crash scene investigations and forensic investigations. He retired after an on-the-job injury. He became an investigator specializing specifically in missing US military personnel, POW/MIAs from World War II, Korea, and Vietnam, and his research resulted in two co-authored books: Soldiers of Misfortune and The Men We Left Behind. Sanders was also part of the investigation into the savings and loan financial collapse in the 1980s and ’90s. He was working on a third book when the crash of TWA Flight 800 completely changed his life.