September 20, 2013 by ConcertKatie No Comments 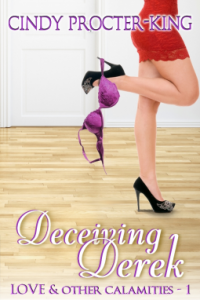 Deceiving Derek is the first in a series of 5 short stories in a series called “Love & Other Calamities”  This book is only 28 pages (actually, less if you’re counting just the actual story and not the excerpt from the next book, etc) and was obviously a quick read.  Lacey is a lingerie designer and in a scavenger hunt for a bachelorette party – she needs to bring a cop to win.  Turns out, her scavenger hunt parter is the twin sister of a cop so she helps set up a story so that Lacey will try and get Derek to turn up to the party so that they can win. What the friend / sister is really trying to do is to fix the two of them up together.  Will it work?

It also sets up the story for the next book in the series which I am looking forward to reading the rest of!

Although the book is short, I think it properly introduced the characters to the reader and was able to completely tell the story that it was looking to tell.  It will be interesting to see how the other stories work in to this story line and what the other girls in the story have in store for them.

Lingerie designer Lacey DeMarco livens up her life by finagling an unsuspecting police detective into attending a funky bridal shower. She needs one last item to complete a scavenger hunt list, and handsome cop Derek McAllister is it. But a little trickery is at work. Both Lacey and Derek are both being hoodwinked…in the name of love.

Deceiving Derek is a romantic comedy short story of 5200 words, or approximately 12 typical book pages, and includes a Sneak Peek at Catching Claire, Story 2 in Love & Other Calamities.

Deceiving Derek is the first of five connected short stories, each featuring a heroine introduced in Deceiving Derek. Follow Lacey and her girlfriends as they prepare for a wedding and find true love along the way.