September 5, 2013 by ConcertKatie No Comments 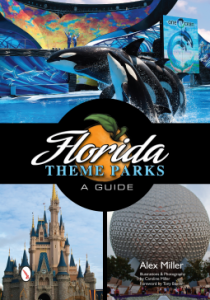 Busch Gardens – It’s been quite some time since I have visited and it appears they have since opened a Sesame Street Safari of Fun area of the theme park.  I honestly couldn’t even tell you the last time I was here.  It was probably 1999 or before.

Fun Spot America – Can’t say I’ve ever been here or heard of it – and the beginning of the chapter says that most out of staters have not heard of it, even though it is in Orlando.  It seems to have a more Carnival type feel and I can see that being why we never bothered with it.  If I was a local, maybe I’d go.

Fun Spot USA – Another one I haven’t heard of, this one is in Kissimmee.

King Richard’s Family Fun Park – is in Naples. Never been there, it looks like it has a royalty/knight theme in South Florida and of course,  the castle has a moat full of gators.

Legoland – This is relatively new and I’ve only been to FL once since it opened.  I’d LOVE to visit – but even if the trip I am dreaming of works out, I don’t think I’ll have enough time to get there.  This is located where Cypress Gardens used to be, which I only know about because they used to have some penny designs!

Universal – Id love to get back here, especially once they have both of the parks connected with the train for Harry Potter!  There have been MAJOR changes to Universal Studios since I was last there in I believe 1999 and Islands of Adventure I only visited for the first time a year ago!

And of course Disney. I need to make a trip to Magic Kingdom now that they opened up new Fantasy Land!  I also havent been to MGM since it is no longer MGM so a trip there may be in store as well.

Overall, if you’re looking for places to go in Florida other than the obvious Disney and Universal, this book will definitely help you out in finding something. But if you’d like to hit up those parks as well, you’ll be able to get info about them in this guide as well!

I received a free ecopy of this book to review from the publisher. I was not otherwise compensated.

Welcome to the Sunshine State – a white sand  paradise that plays host to millions of vacation goers every year. But  beaches and sunshine aren’t the only things guests come looking for. In  less than 50 years, Florida’s blossoming travel industry has earned  recognition as the theme park resort center of the world. Captured with  280 exciting color photos, discover 20 of the state’s unique venues and  the attractions that make them famous. From wild African safaris to  Hollywood-inspired movie-magic, Florida theme parks offer some of the  world’s most diverse entertainment experiences.  Whether you’re planning your family’s dream vacation, or just looking for your next big  adventure, this guide offers a window into the state’s largest and most  exciting industry!
Alex Miller is the author of several books including California Theme Parks.  He works for The Walt Disney Company in Glendale, California.  Caroline Miller is an animator, illustrator, photographers, and filmmaker.  She works as a media specialist for the Science Museum of Virginia.
Foreword by Tony Baxter, Sr. Vice President of Walt Disney Imagineering.

« Previous post
(Another) Crazy Hanson Weekend
Next post »
Book Review: Toby Says Be a Buddy Not A Bully