September 6, 2013 by ConcertKatie No Comments 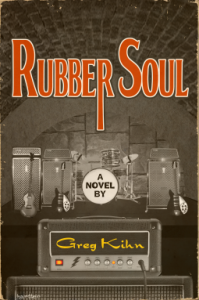 Rubber Soul is an interesting book.  It’s a murder mystery that features the Beatles.  I guess it is almost like “fan fiction” except that it isn’t a girl writing about falling in love with all the Beatles at once like you’d typically see in that genre.  It’s a thriller!  At first I wasn’t sure that it was necessary that the Beatles were even in the book, but as I kept going it became clearer that they were definitely a large part of all the action once things got moving along!

Definitely an interesting book and I love murder mysteries so if there is a genre of “Rock Thriller”? Sign me up to read some more!

Greg Kihn continues to pioneer the Rock Thriller Genre with RUBBER SOUL, a murder mystery and an action packed ride through Beatlemania, featuring THE BEATLES themselves.

Dust Bin Bob runs a second hand shop at the Flea Market on Penny Lane. He has an extensive collection of American R&B singles that he gets from Merchant Marines returning from Baltimore and New York. The action starts when he befriends some blokes by the name of John, Paul, George and Ringo and becomes their lifelong friend sharing the vinyl that will start a revolution.

From then on, it’s a rocket ride from the Beatles earliest days in Liverpool to six shows a night in Hamburg to the Cavern Club and to full-fledged Beatlemania.

Along the way, Dust Bin Bob thwarts a plot by Marcos loyalists to assassinate the Beatles in Manila after they snub Imelda Marcos, blowing off a reception at the palace and narrowly avoiding an international incident. It could have happened!