Let’s Make A Deal at Foxwoods

November 9, 2010 by ConcertKatie No Comments 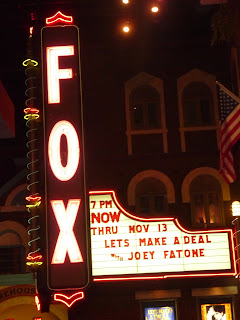 This weekend I ended up seeing Joey Fatone host “Let’s Make a Deal” at Foxwoods Casino twice.  First was Friday night and the second was Sunday afternoon for the matinee show.

The announcer was News 8’s Matt Scott.  I never watch News 8 and he really gave me no reason to change that.  I thought his jokes were awful and I hope that it was not him who wrote them.  They were also the same exact jokes both shows. (Although in their defense I don’t think they intended people to go more than once. What can I say, I love Joey)

Joey on the other hand was amusing, though awkward at times, and while some of what he said seemed scripted he did change things up both shows. He also obviously had to play off the contestants as well and since they were not the same.

Unfortunately my name did not get called at either show and I wasn’t asked for random items from my purse at either show either. Although I didn’t have what he wanted except for on Sunday afternoon he wanted Crazy Bands and I had a whole pack of them in my bag! He asked for the same items on Sunday as Friday, but asked for additional items on Sunday as well. (I’ll help you cheat – Hard boiled egg, ketchup packet, paper clip, something fruit flavored, viagara pill, crazy bands)

For the most part, the set up of the show was exactly the same.  The prizes were all the same, the curtains were all in the same position with the exception of 2 of the games.  In the game where the contestant needed to have a dollar left to buy a prize, the items they had to guess the price of were different. (2 of the 3 items were the same, but in different order) And in the big deal – the curtain with the car behind it was moved.

We were told Joey wouldn’t be coming out after the show on Sunday because he was getting ready for his second show, but I am fairly confident he did meet people after the Friday show.  Whether or not he came out or they had connections to get backstage to him, I don’t know.

It was a fun show and I am so mad that both times the people asked to name the other NSYNC members FAILED.  Everyone knows stupid Justin Timberlake and that is it.  Though I am hoping that soon they will see the success of the NKOTBSB tour and decide to do their own reunion tour.  I’ve already started saving.