August 4, 2010 by ConcertKatie No Comments 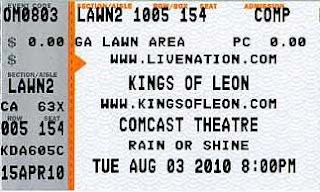 There was a last minute switch, and I brought my cousin Britt with me to this concert.  In the car we discussed Grasshoppers (when you paid $10 to go from the lawn to the pavilion) and we decided we would try to do this, so we opted to not bring in our lawn chairs.

When we got to the handicapped section, there were no chairs set up (and still no security near the section) I found someone to ask and he said that we’d have to rent chairs, he didn’t think that they would be setting chairs up for that show.  That seemed a little ridiculous, since the handicapped section should have equal treatment every show (or at the very least, bring chairs over for those who needed them as they entered the section)  We decided we would wait until the first act got on stage – if no grasshopper guys went by, we would instead use our $10 to rent chairs.

Security ended up bringing us chairs, as well as chairs to the other family that was in the section. (thank you) and then was starting to set up more chairs when we saw the grasshopper guy.  Britt ran for him and he said seats were in section 800 but near the middle, so we opted to buy them.  Unfortunately, if you are the FIRST person to buy grasshoppers (which we were) you get the seats closest to the far wall, not the middle.  But we were inside (there were threats of rain, though it didn’t end up ever raining) and we had a much better view than on the lawn for only $10 so we couldn’t complain too much.

At 8pm, The Stills took the stage. They were from Canada and I really enjoyed their set.  It was short though, only 25 or 30 minutes.

Next up was Built to Spill.  We were all disappointed because the guy next to us thought The Black Keys was opening and was telling us how great they were (I had heard good things about them too so I was interested in checking them out) and then instead Built to Spill came out.  (Not sure if the black keys run with kings of leon is already over or if they are only doing select dates)  Early on in the set the lead singer informed us they would be playing a 40 minute set.  Once again I was annoyed that the stronger opener was on first and then stuck with a mediocre band second. (I don’t care who is more famous or more popular I want a nice flow of the show!)  I had never heard so many cheers when they said “This is our last song”, except it was followed with a “oops we have 2 more” and then a nice “awwwww” (damn!) from the crowd. hahaha.  I’m not sure what it was about this band but I was just not into them and the lead singer sounded like a singer from another band. I am thinking maybe REM but I really haven’t been able to put my finger on it.

Finally it was time for Kings of Leon.  There was a lot of premature screaming for them, long before the house lights went off.  Finally the lights went off, we saw the guys being escorted to the stage by a guy with a flashlight and then some pyro went off sending pink/red smoke out in to the crowd.  The only downside to their opening number (and a couple other songs) was this one BRIGHT BRIGHT light that somehow ended up shining right in our eyes.  Fortunately it was only for about 3 songs where they used this light, I don’t know what I would have done if it was a constant!  I went into this show only knowing 2 of their songs – Sex on Fire and Use Somebody.  The singles that get radio play.

I was incredibly impressed with them – they put on a great show and every single song was completely high energy and they gave it their all.  They played Sex on Fire 45 minutes into their set and Use Somebody was not played until the 2nd song of their 3 song encore. After they played it the place really cleared out – but we stayed to hear their last song.  After they were done with it, the stage had a bunch of pyro going off – which I wish I could have enjoyed more, but unfortunately that darn light was flashing too so it wasn’t in my best interest to actually look at the stage!

Overall it was a great show an I would definitely recommend it if they are coming to your town! (You just might want to show up late if Built to Spill is opening – apparently a lot of people knew this because the place was pretty empty until KOL took the stage – then the place was packed!)

Setlist under the cut – photos to come if anything came out any good!


Knocked Up
Use Somebody
Black Thumbnail


(Setlist is from setlist.fm and may not be entirely accurate – as I only knew 2 songs it is the best I can come up with!)