October 20, 2008 by ConcertKatie No Comments

Yay my first scrapbook post since I started the blog! I decided to do some experimenting with inking. Considering my hands are now almost completely gold and silver (ok, maybe I exaggerate a bit) I’m not sure that this is a technique I will try again, but I think it came out pretty nice.

I did a green/gold page and a yellow/silver page for the Blake Lewis 10/10/08 pics. Click below to see the experiment and finished results! 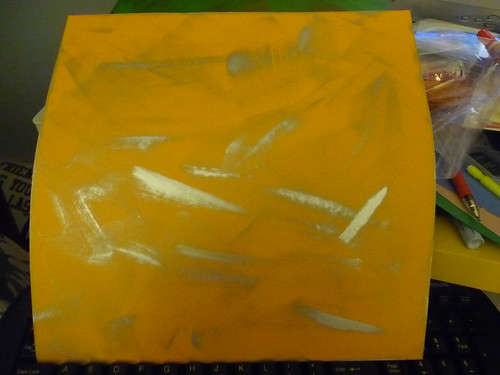 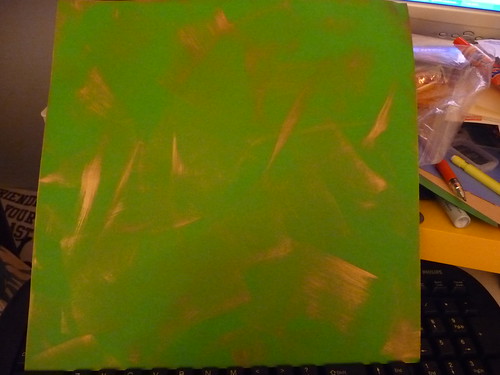 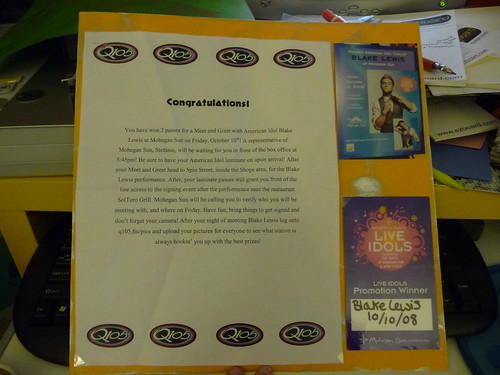 Page 1 – Congrats letter, photo of sign that explained the appearance, and my M&G pass 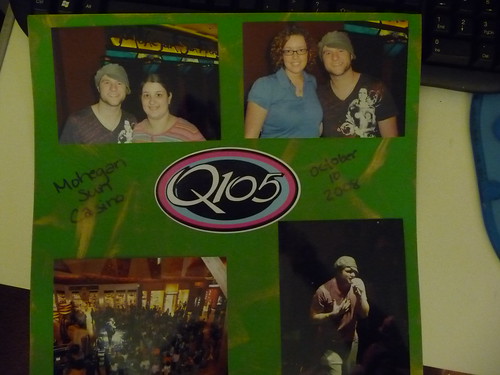 Page 2 – Lauren and I with Blake, a shot above of Blake and the crowd, Blake performing and a Q105 sticker (the radio station I won the passes from)

October 14, 2008 by ConcertKatie No Comments

I’m a member of several fanclubs. I find the $20-$40 yearly membership fee to be worth it if it means being that much closer at the concerts. (But get me to join and then not add any dates near me and I won’t renew and might not go see you ever again – I’m talking to you, Maroon 5)

When Backstreet Boys released their tour dates, I knew I wanted to be close. I had decent seats when I saw them in 2001 or whenever the heck that was, but since we had gotten snowed out of their show last year I felt I owed it to Lisa and myself to get good seats for their upcoming show here.

Except… their fanclub doesn’t tell you where your seats are ahead of time! They simply tell you what sections they are in. The sections mentioned were the first 3 sections in front of the stage, so I figured I’d risk it (plus I had already paid the membership fee so I didn’t want it to go to waste since the NSYNC fan in me definitely was feeling shocked and betrayed)

The seats only go back about 30 rows in those sections, which isn’t bad. It would definitely be closer than we were in last December – because we will actually be IN the theater.

Now I am just waiting for the damn things to come in the mail so I can find out where the seats are. It’s kind of like waiting for Christmas, except the gifts aren’t hidden somewhere and you can’t go sneak a peak. They have to show up in the mail first. Sigh.

In related news, the tickets I have for NKOTB are High Roller seats, which I imagine will be decent much like Fan Club seats are.

And I’m too exhausted to drive the MA to see Hanson this weekend so I’m probably selling my ticket or just not going at all. Zac’s birthday show will be good enough for me.

October 11, 2008 by ConcertKatie No Comments

Thursday I was at work, working. (Because really, what else is there to do at work?) When my phone began to ring. It was an 860 number, but hey, I was at work so of course I answered! It was Q105 calling to tell me that I had won passes to meet Blake Lewis at Mohegan Sun Friday night! I had to get to the radio station before 5 on Friday and be at the casino by 5:45 for the Meet and Greet.

We picked up our passes from the station and were told that we would get to meet Blake around 6, he’d be performing at 7 until about 7:30 and then after that we would get to jump the line for the merch signing. Which seemed weird. Was Blake not going to sign at the Meet and Greet?

At 5:45, we met up wit Stephanie from Mohegan and she told us to go through doors and wait and that no one was in there yet. (Though I very badly wanted to scream like Blake was there to freak out the other girls waiting to come in)

A little while later, Blake came in and then left. And then came back. We thought we’d be moving to another room but we weren’t, we did the M&G in this little lobby area. And Blake did sign. (I bought his CD and got it signed and Lauren had him sign her pass)

Everyone got a photo with him and then we left for dinner which was Ben and Jerrys ice cream.

When we got back to the stage area there was a nice crowd that had formed. I decided to go to the upper level and look down for the performance, while Lauren stayed below for a little bit and then met me up top.

Blake performed 4 or 5 songs, including a free style one he made up about Mohegan Sun. Then everyone made a mad dash down to SolToro for the signing – but Lauren and I went to gamble since we didn’t really see the point in getting in line again when we already got stuff signed.

All in all it was pretty weird.. but very cool.

October 9, 2008 by ConcertKatie No Comments

Welcome to my concert blog! On this blog I hope to post concert reviews as well as my scrapbook pages. I will try to get a backlog of 2008 posted, not so sure about the past 10 years worth of concerts I’ve attended, but we will see!!

I hope to be adding lots of content here, as I keep track of LOTS of random stats for my concerts. How many I’ve attended, how many different artists I’ve seen live, $$ spent, miles driven, etc. I’ll try to get all of that added in the sidebar soon so you can track it all as well.

I’ll try to get an archive somewhere for a list of all the concerts I’ve gone to as well as all the artists I’ve seen. It’s a lot!

If you can’t wait for that – head on over to My Concert Page and check it out.

Also – my scrapbook photo album can be found at Flickr I hope to get a back log posted there and in the future post things directly to the blog… I have high hopes so we’ll see how much I accomplish.

September 6, 2008 by ConcertKatie No Comments

The Idols did not disappoint! Even Kristy Lee Cook, who was mediocre at best on the show, found her niche and actually made the songs she sang sound decent!

I left the show impressed and knew that I would absolutely have to see David Cook again – even if it meant I had to fly to the moon to do it. He was THAT good. I also wouldn’t mind checking out Michael Johns again either.

September 5, 2008 by ConcertKatie No Comments

One of the funnier moments of the night was when a cop came over to 2 guys and asked them if they were staying for the show. “My son is the lead singer” one said. The other was the bands manager. Apparently they had asked some girls if they were on the street team and how old they were and the girls found it creepy and told their parents who told the cop.

I’m not sure if I’d go see Push Play again. They are about to make the “big times” but I really think they need some work and need to become more polished.

You can check out a photo though…

After being in the 3-D movie, and since we were already in the city (and it was raining – or we’d have done a double decker bus tour) we decided to see if we could get tickets for the “sold out” show that evening.

And we could! and they weren’t that bad of seats!

And then during Demi’s set a boy came and sat next to me!

And I thought, this is a weird, a 20something boy is sitting near me and he was not dragged here by a sister or a girlfriend… he is all alone.

Then a girl from a section over comes by and is like “Are you Silas from Weeds?” and he said “yes” and she said “I love that show! Can i get a picture!” (Although at the time I heard “Are you Cyrus from….”)

They took a picture and then he slouched down in his seat. (He is Hunter Parrish, currently in Spring Awakening) but he seemed to be into Demi’s set. After she was done, he left.

The set was basically the same as Hartford, except they were “filming” for the 3-D movie (but I didn’t see any cameras?) and therefore special guest Taylor Swift had to come out and she sang “Should Have Said No” with the boys.

We somehow managed to get out of MSG in like 5 seconds (how, I dont know) hopped in a cab and made our way back to CT. Our train car was FULL of girls who were at the show too so that was cool. (But none of them knew who Hunter was so that was a mystery for a day or so lol)