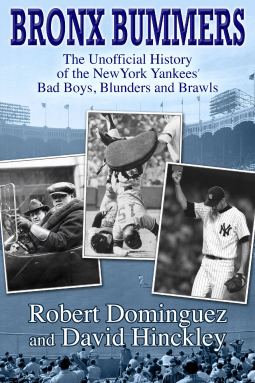 There are so many books out there that talk about all the greatness that has been on the Yankees teams throughout their history.  Bronx Bummers is the opposite of that – the history of the Yankees Bad Boys, Blunders and Brawls.  Each of the 3 B’s get their own part in this 50 chapter book.  I like reading about baseball’s history and this is a look at history that usually isn’t in all of the other books.  Sure I’ve read a ton of books about Babe Ruth but I’m not sure any of them have called him “The Badass Bambino”.  This book ended up being a lot of fun to read and I think that many baseball fans would enjoy it – whether you are a fan of the Yankees or not. (You may enjoy it more if you are not a fan, actually.) Definitely an interesting perspective to writing about the history of a team and I’d certainly be interested in reading more like this about other teams as well.

Whether you love the Yankees or loathe them, even the most casual baseball fan is well versed on the team’s nearly 100-year lineage of legends that span the decades from Ruth to DiMaggio to Mantle to Jeter.

Most every book on the Yankees, therefore, heralds the unparalleled winning tradition of the famed Bronx Bombers.

This is not that kind of book.

In Bronx Bummers: The Unofficial History of the New York Yankees’ Bad Boys, Blunders and Brawls, authors Robert Dominguez and David Hinckley shine a light on the dark side of the team’s otherwise illustrious history.

In 50 lighthearted chapters, Bronx Bummers begins with the tale of the Yankees’ first colorful owners in 1903 — one was a former New York police chief widely considered the most corrupt cop in city history, the other was Manhattan’s biggest owner of illegal gambling dens — and continues through the sordid exploits of some of the team’s earliest stars, including a slick-fielding first baseman run out of baseball for throwing games; a good-hitting pitcher who derailed his Hall of Fame-bound career with his brawling and boozing ways; and even the great Babe Ruth himself, who regularly led the league in HRs, RBIs and STDs.

And while most baseball teams have a history of bench-clearing brawls, Dominguez and Hinckley, veteran New York City tabloid reporters, chronicle how the Yankees hold the unofficial record for most fights between teammates — not to mention the most front-office blunders.

From the bad old days of the team’s origins as the Highlanders all the way to the Bronx Zoo years and beyond, Bronx Bummers divulges what really went on behind the boxscores of baseball’s winningest franchise. 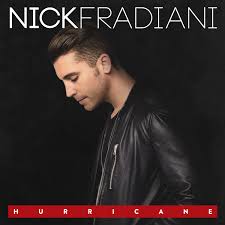 
Hurricane is the debut release from American Idol Season 14 winner Nick Fradiani.  At first, I didn’t like Nick, but he is slowly beginning to grow on me.  This album is pretty good, although a lot of it seems to be about an ex girlfriend. But the tracks are catchy enough that there aren’t any on here that I’ve been skipping and it’s been on heavy rotation in the last week or so in the car.  Despite this album being pretty solid, it is the worst debut of any of the Idol winners to date.  I have to say that a lot of this is probably due to the decline in record sales and the music industry just being in a weird place right now. (Because how else can you explain Caleb, WHO?, selling twice as much!?)