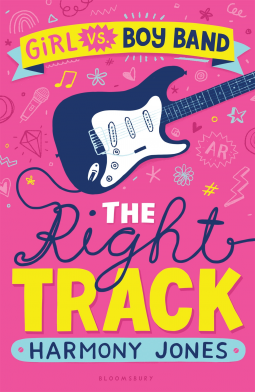 Girl vs Boy Band is a new series and let me tell you that if you think you can get away with reading just this one and then moving on, you’d be mistaken. It does end with a bit of a cliffhanger. Or as I like to say, it didn’t end. (I mean, obviously it did, but no real closure.)

The book is about Lark, who moved from Nashville to California with her music executive Mom after her parents got divorced.  She is a song writer with severe stage fright.  Her Mom ends up signing the hot big up and coming boy band Abbey Road from London and they come to the US to live with Lark and her Mom.

The book sets up the relationships between Lark and the boyband members as well as a friendship between Lark and one of the boys at school who tries to get her to perform with him in the school talent show.

I really liked the book and all the characters and am looking forward to the rest of the series!

For fans of Taylor Swift and One Direction comes a new tween series featuring an aspiring singer-songwriter and the boy band that could steal her spotlight.

Talented but painfully shy eighth-grader Lark secretly writes feisty, heartfelt songs about her life-about school, crushes on boys, not getting along with her mom, and missing her dad who lives in Nashville. But that secret becomes harder to keep when Lark’s mother, a music record executive at her own label, announces that British boy band Abbey Road will be coming to live with them while they make their first album!

Sharing her L.A. house with three noisy, mischievous rising stars isn’t as glamorous as expected, especially when things aren’t going smoothly with the band members. When one of them plagiarizes one of Lark’s songs and passes it off as his own, will Lark gain the courage to step into the spotlight herself?

Harmony Jones is the author of many novels for children and young adults. She splits her time between Connecticut and the Rhode Island coast, where she lives happily with her husband and their two incredibly spoiled golden retrievers. She is a lifelong fan of pop music, and even has a whole room in her house dedicated to her favorite group of all time – the Beatles!