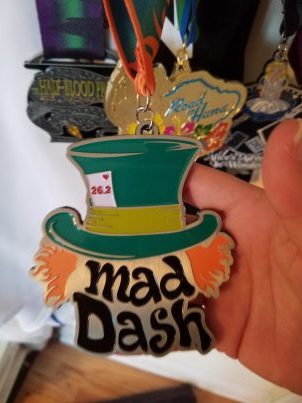 This ended up being the first race I actually completed and the first medal I received.  The Mad Dash was a limited race through Make Yes Happen so it is no longer available.  Their partner races usually support a charity and have limited enrollment – which is part of the reason I am a bit behind on their races and have had to have them delay some start times for me because I buy them to make sure I get in, but don’t want to be doing too many races all at once and triple or quadruple dipping. (I draw the line at double!)  It is possible to do all the races w/ manual miles though and if you do say a 3 mile walk and have 3 races, say you did a 1 mile walk and 1 mile will be added to all 3 races and be equal to the 3 you walked.  I can’t do more than 1 mile in one go though so that’s something that I can strive for later.

This race went through the streets of New York but had no mile markers along the way.  Although the medal is the mad hatters hat, this is not a part of the Alice’s Adventures series.  It took me from April 14 – May 9 to complete this – I first started using only additional walks tracking through Run Keeper but about halfway through grew impatient and tracked it by my Jawbone Up instead.