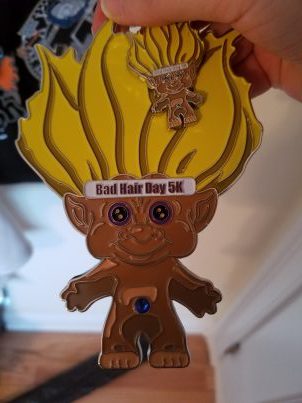 I saw the Virtual Pace Series Bad Hair Day 5k medal and just knew i had to go for it! When I first got into the virtual races I signed up for a TON based on the medals. It ended up with a crazy back log of races I had to complete in June and not wanting to really double dip too much (All my 5ks I try to do with extra walks around the neighbor hood so they count to my Make Yes Happen too but that’s it) I decided to bike this 5k since it was allowed – which I was able to do in about 30 minutes.  Plus, they sent the medal before the designated race start time so it was sitting in its envelope just begging for me to look at it! (I am trying to not open the medals that come early until the mileage is completed as extra incentive)