Book Review: Saved By The Bell 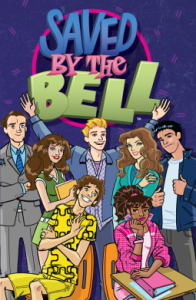 But the thing that I thought missed the mark in this book was that they all had cell phones, laptops, etc.  Zack not having his huge cell phone was something that ruined this adaptation for me (though it is mentioned in one of the stories)

Whereas the Punky book I read wasn’t as affected by the modern additions, I felt that this story was.  Although maybe kids who have never seen the show before will get into it from these comics, they are more like them now.

The classic TV series gets an update for today’s brand new high-schoolers as the coolest kids at Bayside High start their freshman year!

All your favorite characters – Zack, Slater, Kelly, Lisa, Screech and Jessie (and Mr. Belding, of course!) – are starting freshman year at Bayside High, trading in brick phones and mullets for iPhones and Twitter accounts. Does Lisa’s fashion show get on the air, and will Screech ever leave her alone? Will Jessie get that A+? And, most importantly, who’s Kelly going to go out with – preppy Zack or new star athlete A.C. Slater? It’s alright, ‘cause we’re saved by the bell!