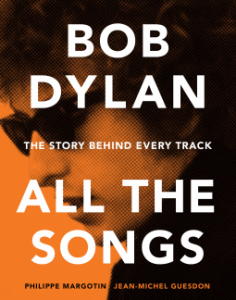 I love these books that go on about every song in an artists catalog (and maybe they give me ideas about compiling the same about a certain band I have a fansite for).

This book includes the story behind every track, information such as the musician, recording studios, run time of the songs, technical team, etc.  Basically everything and anything you have ever wanted to know about Bob Dylan’s songs.

The book is 700+ pages, which makes sense because it covers a LOT of ground.  A very interesting read.

This is the most comprehensive account of Bob Dylan’s work yet published with the full story of every recording session, every album, and every single released during his remarkable and illustrious 53-year career.
Bob Dylan: All the Songs focuses on Dylan’s creative process and his organic, unencumbered style of recording. It is the only book to tell the stories, many unfamiliar even to his most fervent fans, behind all the 525 songs he released. Organized chronologically by album, Margotin and Guesdon recount the details that led to the composition of Dylan’s recorded songs, what went on in the recording studio, what instruments he used, and behind-the-scenes account of the great artists that Dylan worked with.