November 13, 2015 by ConcertKatie No Comments 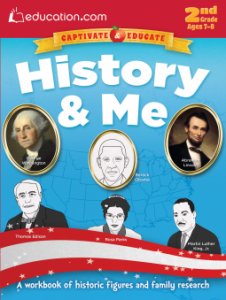 History & Me is a workbook of historic figures and family research.  In addition to teaching children in the 2nd grade age range about historic figures, there are also a lot of fun activities throughout the book.  It starts out with teaching about biographies and has an area for the child to answer questions about themselves that would be the start of their own biography! The book teaches about women in history, all while teaching your child reading comprehension skills as each short biography is followed up with a few questions about what they just read. The American Heroes section has a lot of fun word scrambles to help answer the questions following each of the biographies. Presidential Potpurri has a bunch of fun activities throughout while teaching about some of the more famous presidents.  After you trace your roots in the final chapter of the book, you will have everything that you need in order to write your autobiography!

Education.com workbooks offer thematic content to actively engage children and provide them with fun-filled, memorable learning experiences. Written by teachers and based on subjects educators consider important, these workbooks have been tested by millions of educators and countless hours of classroom use: 1 in 4 U.S. teachers rely on Education.com material. 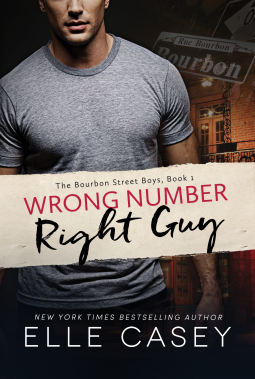 Wrong Number, Right Guy is about May Wexler. The book begins and she is talking to her sister and her sister is getting a new phone. So when she gets a mystery text telling her to come to a dive bar, she thinks that her sister and her kids are in trouble – even though she isn’t really sure why her sister would have the kids at the bar.  She heads down there anyway – with her dog Felix – and ends up in the middle of a shootout.  A big dude with a big beard helps her out and makes sure that she gets home safe, but she ends up at his house instead when she thinks she is being followed.  The big dude is Ozzie, who runs the Bourbon Street Boys, a private security firm.  May is a photographer and he offers her a job doing surveillance work for the company.

Now that Ozzie no longer has his big beard, May is a bit attracted to him, but can she act on it? He is her boss!  But maybe the wrong number brought her the right guy…  But if they act on their feelings, will they let down their guard and make it so May is no longer safe?

I really liked this book. It had some action, some mystery and some romance, you can’t really ask for more. It was well written, and kept me wanting to keep reading to see not only what may happen between May and Ozzie but if the bad guys really were after May and if Ozzie and his BSB crew could keep her safe.

When a mysterious text message summons May Wexler to a biker bar in downtown New Orleans, she knows something is very wrong. Her sister has sent out an SOS, but when May gets there, she’s nowhere to be found and May is the one in trouble—she’s wearing pink espadrilles, she’s got a Chihuahua in her purse, and she’s in the middle of a shootout.

After tall, muscular Ozzie comes to her rescue, May has no choice but to follow him to safety. At the headquarters of his private security firm, the Bourbon Street Boys, she finds a refuge for the night—and the offer of a job. But it’s not long before a gun-toting stalker isn’t the only complication in May’s life: the more time she spends with Ozzie, the less she can deny that they’ve got some serious chemistry. A wrong number got her into this mess…Will it also get her the right guy? 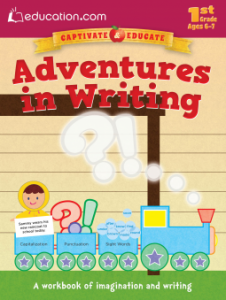 Adventures in Writing is a workbook of imagination and writing geared for 1st graders aged 6-7. The book is very interactive with flash cards, activities and worksheets for your child to try to help learn the points that are being taught in the book.  I kind of wish I was 6, because it looks like it is a lot of fun! At the end of each chapter is a “Great job!” certificate to show that you have mastered the chapter and are a superstar! You can also color it in, too. Each chapter builds on the lessons taught in the previous chapters as well to help really bring the message home.  All of the cut out activities and coloring activities look like they would be a lot of fun – while being very educational as well!

If you are a teacher or have a kid who is 6-7 years old in your life, you’ll want to check out this book to help teach them the rules of writing!

There is a lot that goes into good writing — and this workbook collection shows young writers how to succeed.

Education.com workbooks offer thematic content to actively engage children and provide them with fun-filled, memorable learning experiences. Written by teachers and based on subjects educators consider important, these workbooks have been tested by millions of educators and countless hours of classroom use: 1 in 4 U.S. teachers rely on Education.com material.

Book Review: Shout It Out Loud 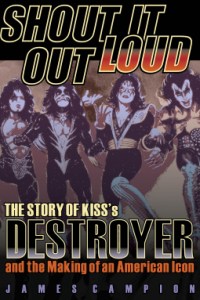 Shout It Out Loud is the story of Kiss’s Destroyer.  I liked that the table of contents were set up like a cassette tape would be.  Kiss would do anything to make it and to stay there, and it looks like they definitely had the right plan – since they are still around now.  The book talks a bit about the history of the band and also goes into depth on Destroyer and breaks down the songs and the lyrics.  Definitely a really cool book, a biography and a bit more! I always enjoy reading about other albums and lyrics!

How does an underground oddity become a cultural phenomenon?

For over 40 years, the rock band Kiss has galvanized the entertainment world with an unparalleled blitz of bravado, theatricality, and shameless merchandising, garnering generations of loyally rabid fans. But if not for a few crucial months in late 1975 and early 1976, Kiss may have ended up nothing more than a footnote.

Shout It Out Loud is a serious examination of the circumstance and serendipity that fused the creation of the band’s seminal work, Destroyer – including the band’s arduous ascent to the unexpected smash hit, Alive!, the ensuing lawsuits between its management and its label, the pursuit of the hot, young producer, a grueling musical “boot camp,” the wildly creative studio abandon, the origins behind an iconic cover, the era’s most outlandish tour, and the unlikely string of hit singles.

Extensive research from the period and insights into each song are enhanced by hundreds of archived materials and dozens of interviews surrounding the mid-’70s-era Kiss and its zeitgeist. New interviews with major principals in the making of an outrageously imaginative rock classic animate this engaging tale.