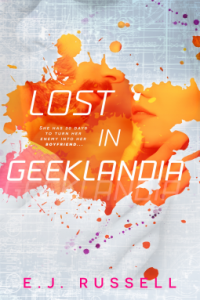 Lost In Geeklandia is about Charlie, a girl who has been trying to make a dating algorithm ever since her arch-nemesis Daniel has lost his professional reputation after trying to back a similar idea of a love algorithm that turned out to be nothing but a scam.  There’s only one problem.  When she tries the algorithm on herself, she gets matched with… arch nemesis Daniel.  Is the algorithm right or is it horribly wrong?

Each chapter starts with a “Geekronym”, most of which I already knew. I couldn’t always tell how these ended up working with the chapter ahead though and other reviews I read said they were nothing but confusing for those who don’t know what they are talking about.  There are also a lot of “geeky” pop culture references – a lot for Star Trek and Dr Who – neither of which I was a fan of so I couldn’t really appreciate them (and there were probably a lot that I missed, as well).   I found the book to be cute, at times a bit hard to follow, and I couldn’t help but wonder – what happens when Daniel finds out this is all a set up?

I am happy to report that he DID find out it was all based on an algorithm, but no, I can’t tell you what happened. You’ll have to read for yourself to see 🙂

She has 30 days to turn her enemy into her boyfriend…

Introverted computer engineer Charlie Forrester has coded an algorithm for love, a nearly flawless matchmaking program. But then she’s challenged to prove its accuracy – on herself. With her dream job on the line, Charlie has thirty days to forge a romantic relationship with her “perfect” match…her ex-friend and now-nemesis, Daniel Shawn. Since her dating experience is expressed in binary, she’ll need more than flirting lessons and a wardrobe overhaul to pull it off.

After falling victim to the same online matchmaking con he was investigating, reporter Daniel Shawn’s professional reputation went up in flames. Now he suspects someone has rebooted the scam, and he’s determined to expose the fraud and rebuild his career. Unfortunately, his efforts to get back in the game get sidetracked by Charlie and her adorable geekitude, even though she seems to know a little too much about digital dating for Daniel’s comfort.

And when fake romance crosses into real chemistry, Charlie’s formula for love might just be the perfect formula for disaster…

« Previous post
Book Review: Spending the Holidays with People I Want To Punch In The Throat
Next post »
Book Review: Punky Brewster