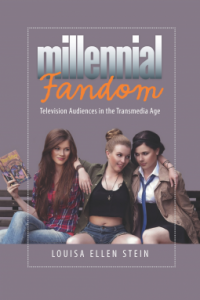 Millennial Fandom is a series of essays about Television Audiences in the Transmedia Age. By definitions – Millennials are those born between 1982 and 2004 (me!) and make up teens and young adults. The book focuses on a few shows, most of which I have watched. It starts out with Glee in ‘The Millennial Hope” section of the book. There is also “Millennial Noir” and “Millennial Transformation”.

Millennial Hope focuses more on positive narratives while Millennial Noir focuses more on negative visions of millennials. It focuses a bit on Gossip Girl and their “OMFG” promos that were the cause of some controversy when they were first released. It also talks about females in power as seen in Gossip Girl, Veronica Mars and Pretty Little Liars (this is also a list of some of my favorite TV shows).  It also focuses on how digital access helps shows – fans are able to post art, fan-fic and interact with the actors from their favorite shows.

It also talks a bit about Tumblr, which is one social media site I have never really gotten into. I have an account but I rarely use it and I just don’t “get” it, I guess. But apparently it is a big deal for many fandoms. Maybe I’m missing out?

Overall this was an interesting read and I liked that the majority of the shows mentioned were ones that I watch so that made it more fun to read. A lot of times these compilations are full of shows and movies I know nothing about but this one I have watched at least 1 episode of almost every series mentioned. (I guess that is because I am a millennial that watches too much TV!)

No longer a niche or cult identity, fandom now colors our notions of an expansive generational construct—the millennial generation. Like fans, millennials are frequently cast as active participants in media culture, spectators who expect opportunities to intervene, control, and create. At the same time, long-standing fears about fans’ cultural unruliness manifest in rampant stories of millennials’ technological over-dependence and lack of moral boundaries.

These conflicting narratives of entrepreneurial creativity and digital immorality operate to quell the growing threat represented by millennials’ media agency. With fan activities becoming ever more visible on social media platforms including YouTube, Facebook, LiveJournal, Twitter, Polyvore, and Tumblr, the fan has become the avatar of our digital hopes and fears.

In an ambitious study encompassing a wide range of media texts, including popular television series like Kyle XY, Glee, Gossip Girl, Veronica Mars, andPretty Little Liars and online works like The Lizzie Bennet Diaries, as well as fan texts from blog posts and tweets to remix videos, YouTube posts, and image-sharing streams, author Louisa Ellen Stein traces the circulation of the contradictory tropes of millennial hope and millennial noir. Looking at what millennials do with digital technology demonstrates the molding impact of commercial representations, and at the same time reveals how millennials are undermining, negotiating, and changing those narratives.

This generation—and the fans it represents—is actively transforming the media landscape into a dynamic, culturally transgressive space of collective authorship. Offering a rich and complex vision of the relationship between fandom and millennial culture, Millennial Fandom will interest fans, millennials, students, and scholars of contemporary media culture alike. 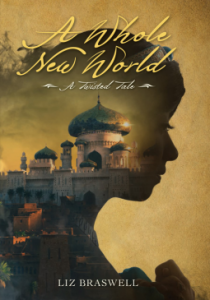 A Whole New World is the first book in the “Twisted Tales” series.  This series reworks Disney stories that you know in love into new and different stories by changing one moment in the original story to have a completely different outcome and how the characters would react to it.  A Whole New World is obviously a new take on the Disney story/movie Aladdin.  But instead of Aladdin summoning the genie, in this story the evil Jafar does!

Jafar takes over as Sultan and Aladdin and Jasmine try to unite everyone in order to fight a war against Jafar and hopefully win. As for how it all turns out, well you’ll have to read the book to find out!

I really like this approach to a book. It uses characters and scenes that I know well and changes them up a bit to make the story different.  I am looking forward to seeing what other Disney stories get reworked in this series!

Welcome to a new YA series that reimagines classic Disney stories in surprising new ways. Each book asks the question: What if one key moment from a familiar Disney film was changed? This dark and daring version of Aladdin twists the original story with the question: What if Jafar was the first one to summon the Genie? When Jafar steals the Genie’s lamp, he uses his first two wishes to become sultan and the most powerful sorcerer in the world. Agrabah lives in fear, waiting for his third and final wish.To stop the power-mad ruler, Aladdin and the deposed Princess Jasmine must unite the people of Agrabah in rebellion. But soon their fight for freedom threatens to tear the kingdom apart in a costly civil war.
What happens next? A Street Rat becomes a leader. A princess becomes a revolutionary. And readers will never look at the story of Aladdin in the same way again. 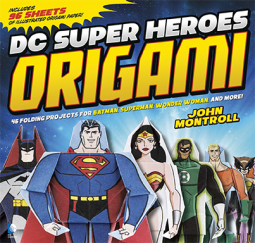 DC Super Heroes Origami features 46 projects related to your favorite DC Super Heroes – Batman, Superman, Wonder Woman and The Justice League. I’ve never quite mastered the art of origami, but this book gives great instructions with images of every step as well as a star ranking to let you know how difficult the particular folding will be for each of the projects included in the book. These look like a lot of fun to make and I am looking forward to hopefully getting a chance to sit down and try to make some of them.

The book has included with it pages that are specially designed to create the characters, their accessories, cars, etc. when used with the instructions.

Book Review: Date With a Rockstar 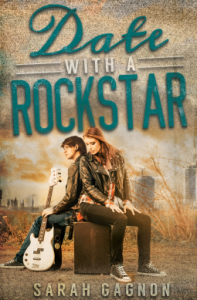 Date with a Rockstar is about Monet, a teenager who decides to enter a competition to win a date with Jeremy Bane – a rockstar who is having a reality show to date him – in order to try and win the prize money.  She has a disease called Fluxem that is passed through saliva which can be cured with a series of shots – that cost too much for her or her mother to afford.  The prize money, however?  Just what she needs to buy herself the cure.

Monet, unsurprisingly, makes it to the Top 10 in the competition.  Each episode one of the girls goes on a date with Jeremy and at the end, the fans of the show will choose the Top 3 that get to move on.  As with any reality show, there’s a twist – where the producers try to dig up whatever dirt they can on the contestants.  They don’t end up revealing she has Fluxem but they do reveal something that she didn’t even know about herself!

Monet seems to have hit it off with Jeremy from the start, and they are always bumping into each other and getting more time together – which of course annoys the other contestants.

I won’t give away what happens…

I really enjoyed this book and I liked that it seemed to take place in the future or somesort of alternate reality where there no longer was a statue of liberty?  I don’t think it was ever really mentioned in the book though, I just kept picking up on things mentioned throughout which was kind of weird. Unless I missed it. I did kind of want to know how it all ended so I speed-read at times! But it is definitely a fun read for anyone who dreams of winning a date with a rock star 😉

Only one girl will win the cash prize…and a chance at love with Jeremy Bane.

Monet isn’t just another lust-struck teenager trying to win the heart of Rock God Jeremy Bane–she needs the prize money from his new reality show to cure her illness.

Monet has Fluxem, a contagious disease that’s spread through saliva. It’s completely curable if you have enough money, which she and her single mother don’t. Now that she’s on the show, Monet has to work harder to keep her Fluxem hidden. She only has to keep the secret long enough to woo Jeremy Bane so he picks her as the winner. She doesn’t even care about the love part; the prize alone will change her life.

But the real Jeremy Bane is nothing like she imagined. Monet finds herself fighting against feelings that make her want to give in to her attraction and Jeremy’s attempts for a kiss. The further she goes in the competition, the more impossible it becomes to resist him–and when the producers turn the tables and start digging up dirt on the contestants, Monet fears her secret will be revealed before she’s ready and ruin everything.

The only way to win Jeremy’s heart is to tell him the truth, but confessing her disease could cost her the competition, the prize money, and him