Book Review: Out of Sight 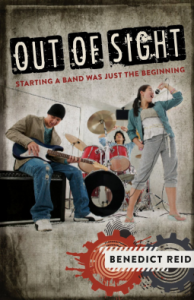 This book is about Rob, an American living in New Zealand. He loves music, but can’t sing or play. So he decides that maybe managing a band should be his path with music.  He forms a band with his friends called Out of Sight.  Rob also has a crush on this girl named Sarah who is having some medical treatments that are going to cost a lot money.  But, the prize money at a battle of the bands seems like it would be just enough to help Sarah out.  So he plans everything out and has the band ready to play their 12 minute set.  Except that he didn’t take into account the crowd liking him and clapping along and throwing off the tempo when a song needed to be sped up to be over in time for the 12 minute time limit.  After playing 15 minutes, Out of Sight is disqualified from the competition. There goes the prize money.

But wait – good managers get good gigs for their bands, right? And bands play charity gigs all the time to help raise money.  So could he put together a charity gig to raise the money that Sarah needs for his treatment?

I thought this book was great, obviously I loved the band and the band dynamic being a big part of the book, but it is also a bit of a love story with Rob and Sarah.  Young love and them both being a bit shy in the beginning to tell each other they like each other.  But then they learn to always tell someone that they like them so that they don’t lose them. Definitely a great lesson. One I’m still learning myself, a bit.

Start a band, make lots of money, change the world. That’s the goal.

Rob loves music. The trouble is, music doesn’t love him. People cover their ears when he starts to sing.

But maybe there’s another way Rob can make an impact. He’s got a bunch of friends who are really talented. David can make the guitar do anything he wants. Jimmy is a star on the drums. And David’s little sister Michelle turns out to be an ace on the bass. Together they form Out of Sight.

Now they just need a manager with initiative. Rob sees a vacancy.

Then there’s Sarah. She’s the smart, cool friend everyone needs, and the band’s no. 1 fan. But Sarah needs to raise money for medical treatment overseas. Maybe Out of Sight could stage a charity gig.

Rob sees an opportunity to launch the band and show his friends just how much he cares.