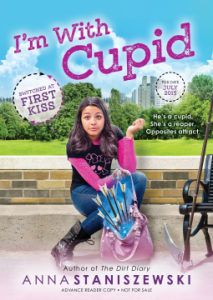 I’m With Cupid is the first in the Switched at First Kiss series.  In this book, Lena and Marcus are at a party and are dared to go into a closet and kiss each other.  They both feel energy from the kiss and think maybe it is because they both secretly like each other.  But then they find out they actually switched powers.  Marcus is a match maker “like cupid without the diaper” and Lena is a soul collector.  Except now someone that Lena was trying to collect the soul of is instead in love with the mailman.  The two need to figure out how to get their powers to switch back and all their attempts at kissing to make things switch back are not working.

Will they eventually get their own powers back or will they be forced to do the opposite jobs forever?

This was a sweet book. It’s YA and based on a couple of 8th graders so it was cute to see Lena’s “things to do before I’m 14” list and what was on it and how much she was able to accomplish through the book.  I also liked reading how Lena and Marcus’ relationship changed throughout the course of the book and how they tried to help each other out.

Marcus is a Cupid. Lena is a Reaper. Opposites attract in the exciting new Switched At First Kiss series by the acclaimed author of The Dirt Diary.

When she’s dared to kiss the adorkable Marcus Torelli at a party, Lena thinks it’s the perfect opportunity to cross First Kiss off her list of “Things to Accomplish Before I Turn Fourteen.”

It’s only when she gets sent on an assignment the next day that she realizes something went horribly wrong. That ZING she felt wasn’t the thrill of her first kiss–she and Marcus have swapped powers! Lena is not your average eighth grader; she’s a soul collector with a serious job to do. And Marcus turns out to be a supernatural matchmaker (like Cupid, but without the diaper).

Now logical Lena finds herself with the love touch, and sweet, sentimental Marcus has death at his fingertips. The truth is that Lena should never have taken that dare…because one little kiss has Lena and Marcus in a whole lotta trouble.