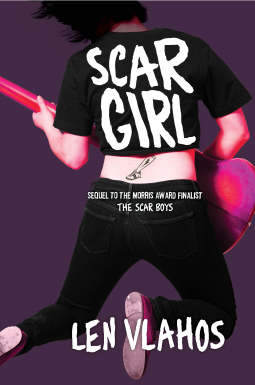 Scar Girl is the sequel to Scar Boys, which I had not read. However, that didn’t make a difference as Scar Girl works as a stand alone book as well. The book is written in interview format – with the interviewer talking to the band The Scar Boys.  Each section of the book starts with a question and then one of the characters goes a bit more in depth to tell the story.

The Scar Boys is made up of Harry – who was struck by lightning and has scars on his face, Johnny who was in an accident and lost his leg, Richie and Chey.  Chey finds out she is pregnant and is keeping it a secret, but Richie figures out what is going on. A little while later, Chey finds herself bleeding a lot and heads to Planned Parenthood to find out she is having a miscarriage. Again, Richie figures out what is going on – but not the rest of the band – and Johnny was the father.

This starts a downward spiral for Chey, as she decides that she needs to drink to wash the pain away and her playing in the band is suffering because of it.  Despite a bad performance, a guy named Jeff wants to be the bands manager. He tells them that they are not to hang out with each other outside the band, for the sake of the band.  Of course, then he ends up sleeping with Chey.

When something tragic happens, the band must once again decide if they can power through or if it is time to call it quits.

I really liked this book I thought it would be more about Chey since she is the “Scar Girl”, but it was really more about the band as a whole. It was a quick read, I liked the “interview” style of it too.

I received a free e-copy in exchange for this review.

Love, music, and heartbreak take the stage in Len Vlahos’s follow-up to The Scar Boys.

Told as an interview with the band after they reach the pinnacle of success, readers will hear from Cheyenne, Harry, and Richie as they discover the ups and downs of being a rock musician, complete with meltdowns on stage and fights that test the limits of the band.

This is the Scar Boys in their own words.

HARBINGER JONES
You mean aside from my face?

CHEYENNE BELLE
I guess I’d say that I’m not good at asking people for help.

RICHIE MCGILL
How the hell should I know? What defines you?

Praise for The Scar Boys:

“Distinguished in every way.”- School and Library Journal *Starred Review

“Etches its way onto the heart and leaves a mark.”-Kirkus Reviews

“Compelling. This book not only captures the feeling of what it is like to form a band, but also the reasons why you form a band. It took me back to that time of being a van on my very first tour.” – Peter Buck, R.E.M. 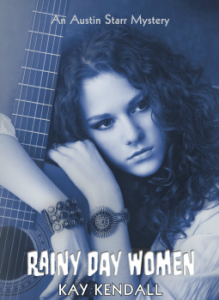 Rainy Day Women is about Austin Starr.  She received a call from her friend Larissa that one of her coworkers and friends was killed and she is the prime suspect.  Larissa swears she is innocent and asks Austin to fly out to Vancouver to help her solve the murder.

Since Austin’s husband won’t be able to stay home and watch their baby, she brings Wyatt along.  This added an interesting element because you were wondering how much danger she would get into and how much danger her baby might be put in and how that might effect her working on solving this case.

The book is set in the 60s, around Woodstock.  This is the second book in a series.  I didn’t read the first one and while I maybe would have liked a bit more back story, but I think that it worked fine as a standalone.

I also, of course, love mystery books with strong female leads! It is a bit rare for this era and you can see the men who work in the chemistry lab where Larissa and her (now dead) friend Shona worked looked down on them because they were women. (Which is actually something that sadly still happens today!)

I enjoyed this book and would like to read more of Austin’s adventures!

Rainy Day Women is set in 1969 right after the Manson murders and during Woodstock. Intrepid amateur sleuth Austin Starr headlines this historic mystery series. In her second case, with her infant in tow, she flies across the continent to support a friend suspected of murdering women’s liberation activists in Seattle and Vancouver. Then her former CIA trainer warns that an old enemy has contracted a hit on her. How much should Austin risk when tracking the killer puts her and her baby’s life in danger?

Book Review: The Princess and the Fog 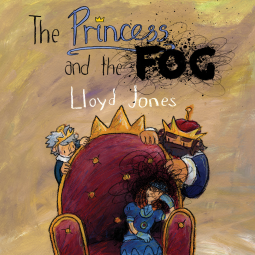 The Princess and the Fog is a children’s book about dealing with depression. I really liked this book because it showed what the princesses signs were (she didn’t want to do anything she used to like to do, she didn’t want to do anything her friends offered, she wanted to stay inside and felt like she was always alone, even when she wasn’t, etc.) and how the princess was able to get help from her community and just talking to them about the fog.  And while the fog did go away, it also talks about what the princess did on the days that the fog did end up coming back.

This is a great tool to help teach kids about depression and help them realize that there are a lot of people all around them – parents, friends, professionals, who care about them and are there to help them and that they should talk about it if they feel like they have the fog too.

Once upon a time there was a Princess. She had everything a little girl could ever want, and she was happy. That is, until the fog came…

The Princess and the Fog is picture book to help sufferers of depression aged 5-7 cope with their difficult feelings. It uses vibrant illustrations, a sense of humour and metaphor to create a relatable, enjoyable story that describes the symptoms of childhood depression while also providing hope that things can get better with a little help and support. The story is also a great starting point for explaining depression to all children, especially those who may have a parent or close family member with depression.

With an essential guide for parents and carers by clinical paediatric psychologists, Dr Melinda Edwards MBE and Linda Bayliss, this book will be of immeasurable value to anyone supporting a child with, or affected by, depression, including social workers, psychologists, psychiatrists, counsellors, arts therapists, pastoral care workers and school staff, as well as parents and carers.

Book Review: The Worst Witch and the Wishing Star 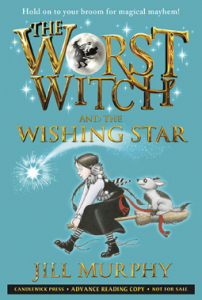 The Worst Witch and the wishing star is about Mildred Hubble and is the 7th book in a series.  I haven’t read any of the previous books and it worked as a stand-alone book.  This is a children’s book and is a quick read with short chapters if your child is looking to read 1 or 2 before bed. There are some great illustrations throughout as well!  Mildred and her friends are working on broomstick management and Mildred is in charge of lighting the lanterns. She’s a bit clumsy so she is trying to be careful and stay out of trouble.  But then she wishes on as star for a dog – and her wish comes true! Now in addition to being careful with the lanterns, she has to sneak off and take her dog for a walk as well.  Will everyone find out about the dog? And what happens if they do?

This was a cute book and maybe I’ll get to read a few others in the series soon!

Be careful what you wish for! Mildred Hubble, disaster-prone witch in training, is back in a seventh charming magical adventure.

Mildred Hubble may be the clumsiest witch at Miss Cackle’s Academy, but as a senior student she’s been assigned the important task of lighting lanterns and candelabras each evening. Inspired by this responsibility, Mildred tries to stay out of trouble. But there are many opportunities for mayhem when a wish on a star leads to a lovable stray pup who, unlike Mildred’s timid tabby, loves to fly on a broomstick. Can Mildred keep Star a secret and avoid setting fire to the school despite an impending talent competition, the disapproving Miss Hardbroom, and her ever-spiteful classmate Ethel Hallow?