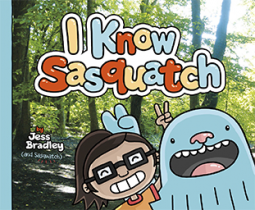 I know Sasquatch is about a girl named Jess (and Sasquatch).  She knows that Sasquatch is real because she met him in the woods one day behind her house. She tells the story of how they met and became friends and how he is really nice and doesn’t like photos that make him look mean.  The pictures in the book are pretty cool, they are real photographs from outside with the characters added on top so it is a little bit of reality and fiction all in ones.

Sasquatch are big, creepy creatures with razor-sharp teeth, long claws, and stinky fur (Ew!). At least, thats what most people think . . . But nobody’s actually ever met one — except Jess Bradley! In this quirky, colorful picture book, Jess describes her first encounter with a Sasquatch and the real beauty inside this Bigfoot beast. (Apparently, he’s a big fan of bubble gum!) You’ll never judge a beast by its stinky fur again! 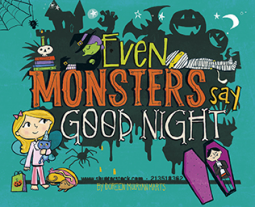 Even Monsters Say Goodnight is about a little girl named Avery who doesn’t like bedtime – especially on Halloween because there are monsters out.  She tries to go to bed, but becomes curious about where monsters sleep and if other creatures sleep at their houses and have their own bedtime too.  So she decides to ask her mom. Mom assures her that they are all sleeping at their own house and they all have bedtimes too and she is safe to go to sleep. Avery decides she isn’t scared any more and she says goodnight to all the monsters – and they all say goodnight back from their respective homes.

This is a really cute book and great for kids who are scared of the Monsters under their bed or a great book to read around Halloween. It teaches kids not to be scared at bedtime.

It’s bedtime, and Avery hates bedtime. She is positive that there are monsters under her bed, expecially on Halloween. Where else would all of those monsters sleep? After a thorough discussion with her mom about the monster situation, Avery finally goes to her room. Does she dare check under the bed? A mix of story text and speech bubbles blend seamlessly in this humorous bedtime tale that both parents and children will relate to.
For ages 3-7.
* Perfect for Halloween
* Story is told through a mix of text and speech bubbles
* The difficulties of bedtime are a relatable and much-discussed topic for parents
* Makes monsters not so scary 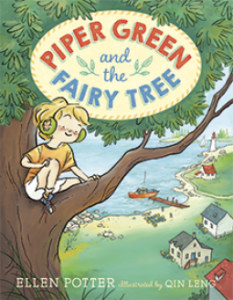 Piper Green and the Fairy Tree is about a girl named Piper who lives on an island and has a fairy tree in her front yard.  Her brother has just left to go to highschool on the mainland so she has his ear muffs and wants to wear them all the time because she misses him. Her parents tell her that if her teacher asks that she take the monkey ear muffs off when she gets to school so is to agree and she says she will, but… The kids all take a lobster boat from the island to get to school.  When Piper gets to her classroom she realizes that she has a NEW teacher – one that doesn’t appreciate the monkey earmuffs.  Piper gets mad and ends up skipping school the next day and sits in the tree in her front yard.  The tree sounds like it is crying and one of her neighbors comes by to realize that there are 2 kittens hiding in the tree.  The neighbor tells Piper the story of the Fairy Tree and how her grandmother used to leave things in it for the Fairies and the fairies would leave her things as well.  Since Piper got 2 kittens from the tree, she decides to give her earmuffs to the tree and names the kittens after the names she had given to the monkey on her earmuffs.

This was a cute book and I loved it since I love fairies. It was a quick read and a great beginning book for Children just learning to read.

ABOUT THE BOOK
From veteran chapter book author Ellen Potter comes a charming new series set on an island off the coast of Maine, where kids, lobster boats, and a hint of magic are part of everyday life.

In this first book of the series, Piper’s older brother leaves Peek-A-Book Island and Piper refuses to take off his old earmuffs, no matter what! Unfortunately, Piper’s new teacher, Miss Arabella, puts her foot down when it comes to earmuffs in the classroom. Things are going from bad to worse… until Piper discovers The Fairy Tree. Is it really a magical tree, as old Mrs. Pennypocket claims?

ABOUT THE AUTHOREllen Potter is the author of ten books including the bestselling Olivia Kidney series, as well as award winning novels, SLOB, The Kneebone Boy, and The Humming Room. Her most recent series for boys, Otis Dooda: Strange But True, is a Cybils nominee.

Another Piper Green Book today – this time Too Much Good Luck.   In this book, Piper thinks that she has too much good luck because 1. her mom is painting her room lime green – the best color 2. She found a perfect strawberry at breakfast (and put it in the fairy tree) 3. There were cinnamon buns on the lobster boat to school 4. She lost her tooth when she bit into the cinnamon bun.  Wondering if too much good luck meant she’d end up having BAD luck… she headed to school.

Once she got to school she found out the class pet had to leave because they were getting a new student and she was allergic.  Piper ended up telling the new student, Camilla, that the teacher was a witch.  After she pulled out an egg and a magic wand from her bag, Camilla freaked out and left the room screaming. Piper got in trouble, of course, and continued her bad luck.

Meanwhile, the fairy tree gave her ONE earring in exchange for her strawberry. She didn’t know why, but her neighbor did tell her that the tree gives you what you need, even though you might not know that you need it.  When she went to apologize to Camilla she was wearing it, and it attracted a parakeet to her shoulder!  Camilla wasn’t allergic to the bird so that became their new school pet!

Another cute book with a nice message.

Book two of Ellen Potter’s charming new series set on an island off the coast of Maine, where kids, lobster boats, and a hint of magic are part of everyday life.

Piper Green is back, and she thinks she’s got it made, with four lucky things happening before she’s even gotten to school. 1) She found a perfect strawberry.2) her mother agreed to paint EVERYTHING in her bedroom lime green (her most favorite color) 3) there are cinnamon rolls on the boat to school and 4) she lost a tooth–cha-ching. When Piper’s friend Jacob warns her that there can be too much good luck, Piper doesn’t believe him. But then she meets Camilla, the new school, and suddenly Bad Luck is everywhere! Maybe the Fairy Tree can change Piper’s sudden bad luck streak?