November 21, 2014 by ConcertKatie No Comments 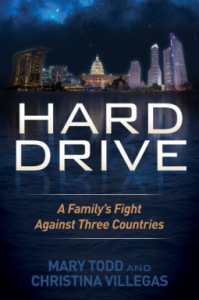 Hard Drive is written by the cousin and mother of Shane Todd, an American Engineer who took a job in Singapore.  He was supposed to be leaving his job and coming back home to the US – but he is found hanged in his apartment and several suicide notes were written for his family and friends on his computer and it is figured it is just a suicide.  By Shane’s family knows better.  Earlier he had mentioned that he thought his life was being threatened to his family. The suicide notes don’t add up.  They are not written by Shane. If he didn’t write them – he didn’t commit suicide.

A break in the case comes when Shane’s parents find a hard drive with the backup of a lot of Shane’s files on it.  The police seem to think that there is nothing important on it and claim that they checked it out and gave it to his parents.  His parents story suggests otherwise. His parents use it to try and prove that Shane’s death was NOT a suicide.

This book would have been great if it was fiction – but the fact that it is non fiction just kind of blew my mind.  Shane seemed like he was very bright and had a great future ahead of him.

I received a free e-copy in order to write this review and was not otherwise compensated.

For the First Time in Print!
THE CAPTIVATING, TRUE STORY OF THE MYSTERIOUS DEATH OF YOUNG AMERICAN ENGINEER, DR. SHANE TODD
–Shane’s family’s grueling battle against powerful forces that have sought to conceal, destroy, or discredit evidence surrounding his murder

On June 24, 2012, Dr. Shane Truman Todd, a young American engineer, was found hanging in his Singapore apartment, just a week before his scheduled return to the United States. Although Shane had repeatedly expressed apprehension about his work with a Chinese company and fear his life was being threatened, authorities immediately ruled his death a suicide. His family initially didn’t know what to believe. However, upon arriving in Singapore, they realized the evidence suggested not suicide, but murder.

Shane’s family later discovered that what they thought was a computer speaker was actually an external hard drive with thousands of files from Shane’s computer. The information in those files transformed this story from a tragic suicide to an international saga of mystery, deceit, and cover-up, involving three countries. “Hard Drive: A Families Fight against Three Countries” is the captivating story of Shane’s mysterious death and his family’s grueling battle to reveal the truth against powerful forces that have sought to conceal, destroy, or discredit evidence indicating homicide. This story, which is told from the unique perspective of Shane’s mother, Mary, recounts the family’s painful, arduous, and unwavering endeavor to reveal the truth about what happened to Shane Todd in Singapore