Book Review: Breaking All Her Rules

November 21, 2014 by ConcertKatie No Comments 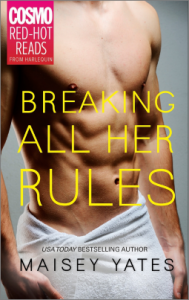 Breaking All Her Rules is about a financial adviser named Grace who meets an artistic cowboy when they are sharing a cab in New York City.  They accidentally swapped cell phones, so of course that meant that they had to meet up again after their first chance encounter.  Grace has a lot of rules that she has made for herself which she lives by – which basically means she is not spontaneous, she doesn’t do anything that might be outside the box and is trying to make her family proud of her.  All that goes out the window when she meets up with Zack and he is in a towel.  She decides that she can throw her rules away for one day – but then it becomes a one night stand time two… three… can you even call it a one night stand anymore? (Nah.)  Zack has his own baggage as well – his daughter died and he ended up divorced and doesn’t want to ever love again.  Will the two go against everything they think is right for themselves to be together?

This was another one of Cosmo’s Red Hot Reads – this is one of the better ones that I have read.  It was nice to see Grace sort of come undone and let loose a little bit throughout the book.  It was also nice to see how Grace made Zach let his guard down a bit and try to let her into his heart – even though he was trying so hard for that to not happen. A cute and quick read.

Buttoned-up financial consultant Grace Song lives life by her own strict rules. Spontaneity leads to chaos. Always play it safe. So when she shares a Manhattan cab with a handsome stranger and they accidentally swap cell phones, her first instinct is to track him down and put things right. Stay on track. Stick with the plan.

But when beyond-gorgeous Zack Camden answers the door draped only in a towel, Grace is suddenly inspired to ditch her rules for a day…and a night. Indulging in one delicious encounter with a perfect stranger is just the break she needs. But one turns into two, then three mind-blowing nights—and soon Grace is in danger of breaking the biggest rule of them all—never fall in love….