Book Review: Getting Off 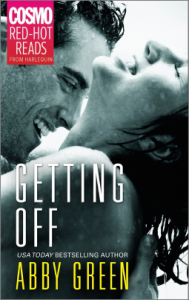 Getting Off has got to be one of my favorite Cosmo Red Hot Reads I’ve read in a while.  It is about Caitlin Ryan who has never had an orgasm.  She has moved from Ireland to New York City in hopes of finding a job and her brother, but in the mean time she is looking for a bar job to get some spending money.  She starts off by living in her Aunt’s apartment, who is away for a while and eventually will need to find her own place.  She meets a guy at the bar named Liam and is instantly attracted to him, and he to her.  They end up hooking up – and he realizes that she is faking it!  She hopes that she never has to see him again, but wanders in to a bar to inquire about a job and it turns out that Liam is the owner!  She gets the job and the patrons love her because she is a real Irish girl.  But now that Liam knows the truth about Caitlin, he is on a mission to help her out.  Will it work?

I really liked this book – the chemistry between the two main characters was written so well that you could totally feel it while you were reading the book.  At first Liam keeps trying to stay away because he doesn’t want to mix business and pleasure, but it is obvious to pretty much everyone that he has it bad for Caitlin. Definitely a must read if you are a fan of the red hot reads like I am!

Caitlin Ryan has never had an orgasm—and she wants one! So does she

(1) Date lots of Mr. Nice-but-Wrongs and keep faking and hoping?

(2) Do a little DIY with a battery-operated friend and a lot of imagination?

(3) Go to NYC and have a wild night with a totally hot stranger?

When (1) and (2) don’t work, Caitlin goes for (3). But even with motorbike-riding sex god Liam, old habits die hard, and yet again she has to fake it. Only he notices—and is not happy! Could things get any worse? Well, yes, when Liam becomes her new boss. But when Caitlin reveals that she’s never climaxed, Liam rises to the challenge, offering a weekend of hot sex with the only goal her pleasure. Will letting him take control work? Caitlin can’t resist finding out….