December 2, 2014 by ConcertKatie No Comments 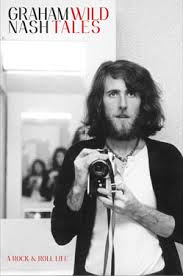 Wild Tales is the autobiography of Graham Nash and retells the story of his Rock & Roll life. The book starts out with him saying he had decided to leave his country, his marriage, his bank account and his band. He shows up at Joni Mitchell’s house, sings a song with Crosby and Stills, their harmonies are amazing and CSN is born. The book then goes back to the beginning, where Nash tells about the time he was “out sick” from school – but was really in line to get some concert tix. He was caught. Music always had an effect on him and the Everly Brothers were really what made him want to make music.

His first band was The Hollies – who did gigs with the Beatles – even before Ringo was in the band. He also talks about how they had a 15 year old song writer write for them.

About halfway through the book, it begins to focus more on CSN and CSNY – their performance at Woodstock – how they never disbanded no matter what was going on between them (and trust me, it was a lot) and even though they strayed from each other they were still a group.

He talked about how he got his home in Hawaii, how important family became to him, and how they had to have an intervention with David Crosby because his drug use was out of control – but they ultimately failed and he needed to hit rock bottom first.

But what impressed me the most in the whole book was that Nash’s son, Will, knew Adam and Jesse from a band called Kara’s Flowers. He said that they were packing it in because they couldn’t make it in the scene, Nash gave them money for more demos and then they were hitting the charts as Maroon 5!

This was a quick read, an interesting read, and a fun read.

I received a free copy of this book from bloggingforbooks in order to write this review. I was not otherwise compensated.

About the Book
From Graham Nash—the legendary musician and founding member of the iconic bands Crosby, Stills & Nash and The Hollies—comes a candid and riveting autobiography that belongs on the reading list of every classic rock fan.

Graham Nash’s songs defined a generation and helped shape the history of rock and roll—he’s written over 200 songs, including such classic hits as “Carrie Anne,” “On A Carousel,” “Simple Man,” “Our House,” “Marrakesh Express,” and “Teach Your Children.” From the opening salvos of the British Rock Revolution to the last shudders of Woodstock, he has rocked and rolled wherever music mattered. Now Graham is ready to tell his story: his lower-class childhood in post-war England, his early days in the British Invasion group The Hollies; becoming the lover and muse of Joni Mitchell during the halcyon years, when both produced their most introspective and important work; meeting Stephen Stills and David Crosby and reaching superstardom with Crosby, Stills, Nash & Young; and his enduring career as a solo musician and political activist. Nash has valuable insights into a world and time many think they know from the outside but few have experienced at its epicenter, and equally wonderful anecdotes about the people around him: the Beatles, the Stones, Hendrix, Cass Elliot, Dylan, and other rock luminaries. From London to Laurel Canyon and beyond, Wild Tales is a revealing look back at an extraordinary life—with all the highs and the lows; the love, the sex, and the jealousy; the politics; the drugs; the insanity—and the sanity—of a magical era of music.