Book Review: The Life and Career of David Beckham 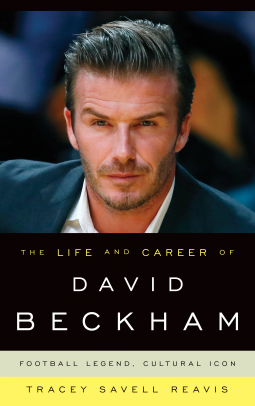 I’ve been trying to cut back on what books I am reviewing lately (although it may not look it since I’ve been pretty steadily doing 3-4 books per ‘Book Nook Friday’) and have tried to limit myself to more music related books and less everything else.  Of course, a book about David Beckham *could* be justified as music because he is married to Victoria – aka Posh Spice.  AND to justify it even further, there is even a chapter dedicated to her and her rise to fame as a Spice Girl.

I liked this book because it doesn’t focus on just the sports aspect of David’s life, but focuses also on him being a cultural icon.  There is more than just what he has done playing soccer (football).  And, always a favorite, there is a section of photos in the middle of the book.

David Beckham is an English soccer player whose popularity extends beyond the field and into international celebrity. He has played for some of the best clubs in the world, including Manchester United, Real Madrid, and AC Milan, and is known worldwide for his free kick expertise and spectacular long-range shots. His singular dedication to becoming a renowned soccer player has been an inspiration to teammates and fans alike.

In The Life and Career of David Beckham: Football Legend, Cultural Icon, Tracey Savell Reavis delivers an up-to-date and refreshing look at one of soccer’s most-recognized athletes. Drawing on extensive research and in-depth interviews, Reavis brings an outside perspective to Beckham’s life in order to reveal his profound impact on the sport in the United States and worldwide. From his birth in Leytonstone, London and his celebrated playing career to his role in bringing the 2012 Olympic Games to London and his retirement from soccer in 2013, Reavis examines the influences that shaped Beckham into the legend he is today.

Featuring photographs and original interviews, this book illuminates Beckham’s status as a soccer star, husband, father, fashion icon, and cultural phenomenon. The first biography since his retirement, The Life and Career of David Beckham will not only appeal to soccer fans, but also to anyone who wants to know more about this international icon.

Tracey Savell Reavis is a journalist and sports historian who has worked as a reporter for Sports Illustrated magazine, staff writer for the National Basketball Association, and National Football League writer for CBS Sports. Reavis is a member of the International Society of Olympic Historians.