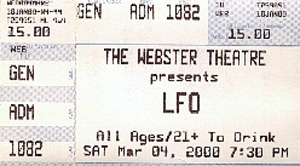 Headliner: LFO
Opener(s): SK8, Boyz N Girlz United
Cost: $15
Setlist:
West Side Story
Baby Be Mine
I Will Show You Mine
My Block
Forever
Think About You
I Don’t Wanna Kiss You Goodnight
Can’t Have You
Girl On TV
Wild Wild West
Limp Bizkit Medley
Summer Girls

We went to see LFO for my friend’s birthday (the show was 2 days before) somehow we suckered her Mom into taking us both.  We ended up getting let in first so that I could be in a good spot to balance so Shea and I ended up front row and her mom hung in the back further away from all the crazy.  I remember that one of SK8’s dancers threw a towel and Shea and the girl next to her caught it, so they got someone to find scissors so they could cut it in half and share it.  Devin’s Mom and Brother were there and so was the original 3rd member of LFO so we got to talk to them a bit since the door to outside/backstage was right by where we were standing.  The guys posed for my camera a couple of times. That was my first time being front row.

SK8 – The Internet doesn’t even seem to believe that such an artist ever existed. I have no idea what her real name is so I can’t tell you what she’s up to now!

Boyz N Girlz United – Robbie from this group auditioned for American Idol a few years back and made it to the top 24.  They opened for Britney Spears and NSYNC and toured on the All That Music and More tours but never released more than one album.