Book Review: The Best Seat in Baseball, But You Have to Stand! 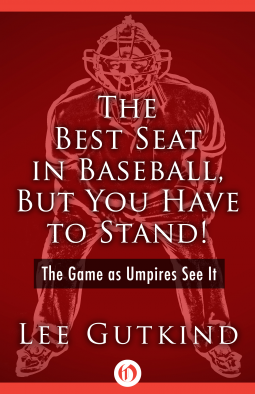 The Best Seat in Baseball, But You Have to Stand! is a book about The Game as Umpires See It.    Not that I’ve been reading baseball books for all that long – but I’ve never really seen a book from the umpires point of view.  Maybe its because a lot of baseball fans can consider the umpires to be the enemy since they can be responsible for blown calls that can alter the course of the game.  Either way, I was definitely interested in checking out this book to see what could be said about the umpires and the game of baseball.

This book was written in the 1970s, so it mentions a lot of the older players (Tom Seaver, for instance) though I’m not sure that their jobs have changed much or that they’re looked upon any nicer lately so the problems they are faced with are probably very similar from the 70s to now. (With the exception perhaps of the new “challenge” that is in place new this season.) It follows a crew throughout several games in the season and their thoughts on the teams and the game and the players. How they handle criticism and injury.

Certainly still an interesting read even if it was written before my time. 😉

A fascinating and revealing look inside the lives of umpires, from the godfather of creative nonfiction

In 1974, Lee Gutkind walked into Shea Stadium, then home of the New York Mets, with an unusual proposal. He wanted to chronicle one of the least celebrated cadres in professional baseball: the umpires. Gutkind spent one exhilarating season traveling with the officiating crew he found that day—Doug Harvey, Nick Colosi, Harry Wendelstedt, and Art Williams, the first African American umpire in National League history. Gutkind’s narrative reveals much about the peculiarities of the men charged with the “thankless and impossible task of invoking order”—their work ethic, fallibility, and perhaps most strikingly, their pride.

As resonant today as when it was first published, The Best Seat in Baseball, But You Have to Stand! is an engrossing story of the men who work on one of the nation’s biggest stages, their victories and their failures, and their inner worlds that are rarely—if ever—explored.