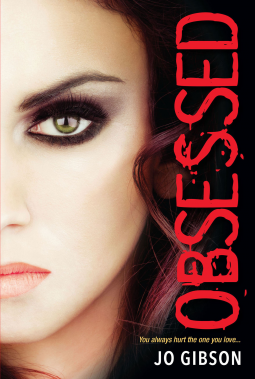 Obsessed is 2 books in one – The Crush and The Crush II.  I believe they were originally written in 1994 (based on the copyright) which for the most part didn’t really seem to matter – but at one point they were all pretty impressed about a car phone and I think if everyone had cell phones in their pockets with cameras this story wouldn’t have played out quite like it did. Oh and there is some mention of cassettes as well! 😉  The book actually reminded me a bit of Pretty Little Liars which is just the type of suspense novel that I love so I got right into this story as soon as it started.  (The book blurb that was provided is also incorrect as Michael’s last name is Warden not Barton, so perhaps it has been updated slightly for its release as an ebook?)

I am going to try really hard to go about this without giving away major plot points.  But the book takes place at a teen nightclub called “Covers” where they perform, work in the kitchen, run the “bar” (no alcohol!), etc.  One of the guys who performs is Michael and he has recently broken up with his girlfriend and seems to be down.  The girls make a contest to see who can date him the longest.  Whoever can date him for 2 weeks wins.  Pretty much all the girls that work there are in on this contest and ready to compete.  Except that all the girls that he is dating seem to be killed off, one by one. (And he quickly moves on to another which I tried to not dwell on too much!)

At the end of the first book/part we think that everything is solved.  The suspect is dead and while Michael is considered a suspect on and off throughout the investigation, he seems to be in the clear.

When the next book starts up I wasn’t sure we actually needed a second part.  Although after having read it I have to disagree with my early thoughts. We absolutely needed this second book!  Everyone is trying to move on now that it seems that the “Cupid Killer” is gone out of everyone’s lives.  Michael was in the psych hospital but has gotten out and is now doing much better.  But then more of the girl’s Michael is with begin turning up dead.  So of course, Michael seems to be the prime suspect once again.

Then you start to wonder – is everything that I thought was true in the first book totally a lie? Was it Michael? Was it someone else entirely and the first “killer” just took the blame to put it all to an end?

I won’t say much more than that – but if you are into the Pretty Little Liars series, I think you will really enjoy Obsessed, as I know that I did!

Michael Barton is smart, sweet, gorgeous–the total package. Which is why some of the girls have decided to have a little contest. Whoever hooks up with Michael first will be the winner. There’s just one problem. One of the girls has been harboring a secret crush on Michael for years. She’ll do anything to be his girlfriend. She’ll play the game. She’ll win his heart. She’ll beat the competition. . .to death.

Michael Barton has experienced the dark side of love. He has survived the advances of a psychotic stalker. He has endured her deadly game of obsession. And now he is free from her web of lust and lies. But Michael has a surprise waiting for him. His secret admirer is still out there. Watching. Waiting. Plotting her next move. And if Michael thinks he can escape her this time, he’s wrong. . .dead wrong.