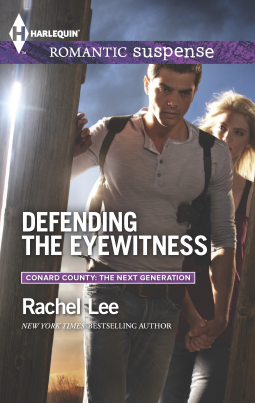 Defending the Eyewitness combines 2 of my current favorite book genres – romance and suspense!  Corey is our main female character  – as a child she witnessed her mother’s murder, but has since tried to block most of it from her memory. Since then – she has had some trust issues with men and typically only rents out her extra room in her apartment to other females.  However, as a favor she decided to house Austin – who was an undercover cop and is now recuperating and waiting for the right time to return back home – when he knows he won’t be recognized by anyone who was involved in the undercover operation he was working on.

Corey has been getting mysterious notes.  She shrugged the first one off – but now that there have been 3 – she gets Austin involved and Austin involves the authorities.  They are not sure who is sending the notes.  While all this is going on – Austin and Corey are of course growing closer to each other.  Corey is a bit reserved, but for some reason she trusts Austin.  Together the two try to figure out who it is that is sending the notes.  Could it be the man who had killed Corey’s mother?  Should she try to remember what she saw? Is that why he may be coming after her? Or is it just a prank and she shouldn’t worry about it?  Whoever it is – they seem to be hiding their tracks pretty well as all the notes are typed and there don’t appear to be any clues or fingerprint evidence left on them.

It’s hard to tell more about this book without giving the ending away – which I definitely don’t want to do. I liked that although it was obvious the romance aspect of the book, the suspense aspect was not as obvious.  The book also was not drawn out longer than it needed to be so it had a lot of action and got to its conclusion without me feeling like chapters were added in just for the sake of having more things written. I really enjoyed this book and will have to check out some more romance suspense in the future!

The note wasn’t a threat, exactly. But for Corey Donahue, who’d witnessed her mother’s murder as a child, it felt very menacing. Surprisingly, the one person she trusted to show the note to was a man merely renting a room from her—Austin Mendez. Traumatized since childhood, Corey had never trusted men…until Austin moved in.

Six years undercover had caused Austin to shut everyone out…until Corey. The vulnerability she hid from others made him yearn to break down the walls she’d erected around her heart. And with a killer closing in, two lost souls were discovering the trust they’d lost—and much more—in each other’s arms.