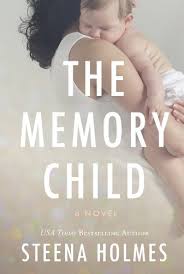 I’m really not sure how to tell you about this book because there is a HUGE twist (which I had an inkling of pretty early on in the book) but if I tell you what it is – it will ruin the book for you and I certainly don’t want to do that.

The book follows the lives of Diane and Brian.  Both of them are big into their jobs and are pretty big deals at their companies.  In fact, Diane gets a promotion just as she finds out that she is pregnant with the couples first child.  Diane is terrified because her mother killed her baby brother and then herself after suffering postpartum psychosis.  The doctors aren’t sure if it is hereditary or not and Diane hopes that those around her will be able to see the signs and help before its too late should she suffer from it as well.

Brian told his job that he’d like to travel less now that the baby is due, but he also gets a promotion that needs him to be in London around when the baby is going to be born to help set up a new office. They hire a nanny to help out Diane who is now on bed rest until the baby is born.

Although the book gave me clues to figure out what the twist was, I was never really 100% sure that it was going to be what actually happened so I needed to keep reading to make sure that I was right. As I kept reading there seemed to be more and more clues but ultimately I was on the right track but there was a lot more to what was going on than I had figured out on my own.

I often have issues with endings of books but I think that this one had just the right amount of closure and gave me what I was looking for and didn’t leave me hanging or confused.

About THE MEMORY CHILD

The story of a married couple, Diane and Brian, that learn they are pregnant with their first child has come at an unfortunate time.  Brian is thrilled with the news since he has patiently waited for twelve years to become a father, however Diane is unsure of her excitement.  With her family’s dark past, her recent promotion, and Brian being called away to London for work parenthood has arrived unexpectedly.  When a year has passed and Diane is completely head over heels in love with her precious baby girl, Grace, Brian has still not returned from London.  Diane’s dark past collides with her mysterious new life and the surreal family drama is unveiled.