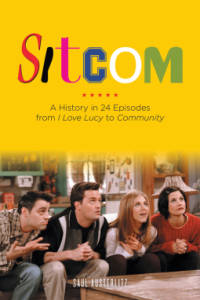 This book puts together 24 Sitcom episodes in order to create the history of the sitcom. Shows in included The Honeymooners, Leave it the Beaver, Cheers, Roseanne, etc. Sitcoms were there to have the people laugh, especially when times outside of the living room may have been tough.

The book is in chronological order based on when the sitcoms premiered and focuses on one episode but tells a bit more about the impact that the show had on its time. It’s kind of interesting to see the evolution of the sitcom this way.

I found it incredibly interesting and not just because I watch far more TV than I probably should. (Although only 1 of the 24 shows did I actually see every episode of. I’ll leave it up to you to figure out which one!)

A carefully curated tour through TV comedy series, this mixtape of fondly remembered shows surveys the genealogy of the form, the larger trends in its history, the best of what the genre has accomplished, and the most standard of its works. From I LoveLucy, The Phil Silvers Show, and M*A*S*H to Taxi, The Larry Sanders Show, and 30 Rock, this guide presents the sitcom as a capsule version of the 20th-century arts—realism giving way to modernism and then to postmodernism, all between the hours of 8 and 10pm on weeknights. Each chapter springs from an individual representative entity, including The Simpsons’ “22 Short Films About Springfield,” The Mary Tyler Moore Show’s “Chuckles Bites the Dust,” Seinfeld’s “The Pitch,” and Freaks and Geeks’ “Dead Dogs and Gym Teachers,” where Martin Starr’s nerdy Bill takes comfort in—what else—the pleasures of laughing at TV.