March 7, 2014 by ConcertKatie No Comments 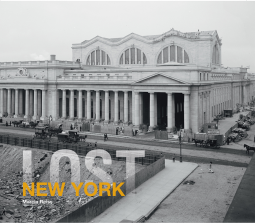 Lost New York is an amazing book with some great photographs and information about beautiful New York buildings that are no longer. It’s kind of a shame because they really are spectacular and I’d love to photograph many of them if they still existed. (2 I had been to before they were demolished – Yankee Stadium and Shea Stadium!) I’ve never been to Coney Island, but it looks like I missed out on a bunch of cool stuff (though most of it was already gone by the time I was born).  And some gorgeous mansions were demolished in the city as well. Wow. Definitely a great book for fans of New York, Architecture, History, Photography… This book covers it all.

Like a parallel universe, an entire city could be formed with the lost buildings of New York City’s past. Lost New York is a walk through this virtual metropolis. More than an architectural tour, it is a fascinating view of the city’s ever-changing landscape and way of life, from magnificent buildings like Penn Station and the glorious mansions of the Gilded Age to trolleys, diners, racetracks and baseball parks that now exist only in photographs.

Filled with intriguing photographs on every page, the book illustrates both the city’s distant and recent past, from the mid-nineteenth century through the first decade of the twenty-first. It follows a chronology of constant change, charting the years when the major features of the city were destroyed, altered or abandoned. Forests of tall-masted ships, horse-drawn carriages and massive train terminals gave way to cars and trucks. Dazzling amusement parks and luxurious resorts in Coney Island, the great World’s Fair of 1939, rock ’n’ roll palaces, and many romantic features of Central Park are now only memories. Buildings that have become icons of the New York cityscape hide an earlier history, like that of the first Waldorf-Astoria, the world’s largest and most opulent hotel that once stood on the site of the Empire State Building.These lost places are interwoven with engrossing stories of the multi-millionaires, robber barons, artists, engineers and entrepreneurs who shaped New York. They are a record of historic events, of disasters like the sinking of the Normandie at a Manhattan pier, and the world-shaking tragedy of the World Trade Center. The dynamic forces that created New York left a trail of memorable yet neglected history as amazing as the city today. Rediscover it in Lost New York.

Author Information
Marcia Reiss is the author of seven books about New York history and architecture including the best-selling New York Then and Now. Her most recent works include New York City at Night and Central Park Then and Now, as well as a series of guides to historic Brooklyn neighbourhoods. She was Policy Director of the Parks Council, now New Yorkers for Parks, and previousy Public Affairs Director for the New York City Department of Ports and Trade. She also taught at Columbia University and Hunter College, and was a reporter for the Brooklyn Phoenix and the Seafarer’s Log. She and her husband have lived in several buildings in Manhattan and Brooklyn as old as the ones in Lost New York. Fortunately, non are lost. They now live in an 1840s farmhouse in upstate New York.