Book Review: Give Save Spend with the Three Little Pigs

March 4, 2014 by ConcertKatie No Comments 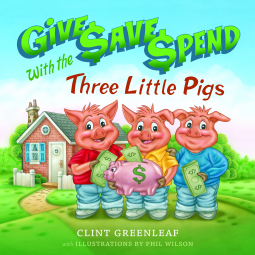 Give, Save, Spend with the Three Little Pigs is kind of a sequel to the story of the Three Little Pigs.  After they had their houses damaged and all moved into the brick house, the big bad wolf continued to blow down everyone of the other animals houses.  They realized that the brick houses were the safest and so they hired the pigs to make them a home.  The 3 pigs realized that they had money but weren’t sure what to do with it.  One thought that they should spend it on fun things! The other thought that they should use it to help some of the other animals who need help and the last one thought they should save it so that they had it incase of an emergency.  Now whenever the pigs get money, they split it amongst their 3 banks!

I think that this book is a great idea to teach kids how to save.  Fun things only last for so long, helping people can last a lifetime and you never know when an emergency may come up that you’ll need money for.  Keeping 3 separate banks makes it easy to decide how much you can donate, spend on fun or have “just incase”

I received a free e-copy of this book to write this review, I was nother otherwise compensated.

The Big Bad Wolf is back, and he’s blowing down houses in the forest, one by one. The Three Little Pigs hatch a plan to help other animals weather the wolf’s mighty lungs. They start a building company, offering strong homes built of brick, just like theirs.

Demand is high for the brick homes the Pigs build, and their business becomes a success. Now they need to figure out what they should do with their hard-earned profits.

One little Pig wants to spend away, another wants to give it away, and the third wants to save it. Based on the give-save-spend-concept, this sequel to the classic fairy tale teaches kids a safe and practical approach to managing money.

Schools don’t teach basic finance, and most books about money are too confusing for younger children. An entertaining first step in any child’s education, Give, Save, Spend with the Three Little Pigs is easy to read and understand.