September 10, 2013 by ConcertKatie No Comments 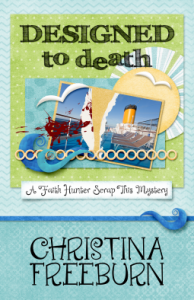 Designed to Death is another book in the Faith Hunter Scrap This Mystery.  It seems that Faith and her grandmother’s store is always the center of a criminal investigation lately.  After holding an event at the scrapbooking store a fight breaks out between Darlene and her cousin Belinda. Darlene accuses Belinda of stealing her scrapbook designs and entering them in a contest which she then won.

Later that night the alarm company calls Faith and said that the alarm had been triggered at the store.  She tells them to call the cops and heads out to the store to find that Belinda is there – dead.

Despite being told to not dabble in private investigating once again, Faith wants to find out who did it.  She is convinced that it is Darlene, based on the fight that they had earlier.  Except that in order to find out more, she must team up with Darlene.

The suspects seem to keep multiplying and the police detective keeps telling Faith to butt out.

This was another really great mystery story and I really had no idea who to think did it because there were so many twists and turns and other possible evidence popping up.  I am looking forward to the 3rd story coming out in early 2014!

I received a free e-copy in order to write this this review. I was not otherwise compensated.

Faith Hunter planned the perfect event at her grandmother’s shop, Scrap This, featuring local scrapbooker and Life Artist Diva, Belinda Watson. But the extravaganza goes up in a cloud of glitter when Belinda and her cousin, Darlene, brawl over scraplifted designs. Faith attempts to break it up, but only makes things worse. Then when Belinda turns up dead behind the Scrap This store, Faith’s involvement goes viral.

As accusations against her turn vicious, Faith sets out to prove her nemesis, Darlene, committed the crime, only to realize they are both innocent. Now they must team up or the murderer’s plan will come together seamlessly with the frenemies sharing a jail cell—or worse, a funeral.

DESIGNED TO DEATH is the second book in the Faith Hunter Scrap This mystery series. Be sure to check out the first crafty mystery, CROPPED TO DEATH. Bonus: includes scrapbooking tips.

The Faith Hunter Scrap This Mystery series brings together Christina Freeburn’s love of mysteries, scrapbooking, and West Virginia. When not writing or reading, she can be found in her scrapbook room or at a crop. Alas, none of the real-life crops have had a sexy male prosecutor or a handsome police officer attending.

Christina served in the JAG Corps of the US Army and also worked as a paralegal, librarian, and church secretary. She lives in West Virginia with her husband, children, a dog, and a rarely seen cat except by those who are afraid or allergic to felines.