September 15, 2012 by ConcertKatie No Comments 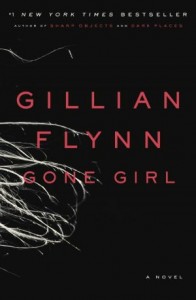 I had been hearing a lot about this book, but a lot of times I have many other review commitments to keep and the books I want to read for the hell of it get pushed aside.  In the time I waited, my mom’s friend ended up lending her the book – not knowing I had it waiting. Once she started talking to me about it “You’ll LOVE it”, I knew I had to shuffle things around so that I could find the time to read it.

I’m not sure how to really talk about the book without giving things away – so bear with me if things are a bit vague.  On Nick and Amy’s fifth wedding anniversary, Nick gets a call from a neighbor that the front door is open – wide open.  Nick heads home and finds that his wife Amy is nowhere to be found and the living room is messed up a bit which he assumes means there was a sign of a struggle.

He calls the cops and they start an investigation to find his missing wife but as most of these investigations go – the husband is always suspect #1.  The chapters alternate between Amy’s diary entries about how they met and their early life together as a couple and Nick’s recounting of the events since Amy’s disappearance.

In the second part of the book – things REALLY start unraveling and there were a few twists that shocked me quite a bit. (Although my mother says she was not shocked over any of the same things that I was.)  At this point I could not put the book down.  Things just seem to get crazier and crazier.

However, I felt that the ending didn’t really live up to the rest of the book.  This is something my mom had warned me about – she (and I) dislike endings that don’t really seem to wrap everything up.  The friend who lent my mom the book said “Well, it ends” when my mom asked at first if it had a good ending.

But, with the exception of that – I definitely recommend this suspenseful page turner and I am looking forward to finding the time to read Gillian Flynn’s other books because I absolutely loved her writing style.

I read this book on my own time and was not asked to write a review. I simply thought it was a book that my readers might be interested in.

Marriage can be a real killer.
One of the most critically acclaimed suspense writers of our time, New York Times bestseller Gillian Flynn takes that statement to its darkest place in this unputdownable masterpiece about a marriage gone terribly, terribly wrong. The Chicago Tribune proclaimed that her work “draws you in and keeps you reading with the force of a pure but nasty addiction.” Gone Girl’s toxic mix of sharp-edged wit and deliciously chilling prose creates a nerve-fraying thriller that confounds you at every turn.
On a warm summer morning in North Carthage, Missouri, it is Nick and Amy Dunne’s fifth wedding anniversary. Presents are being wrapped and reservations are being made when Nick’s clever and beautiful wife disappears from their rented McMansion on the Mississippi River. Husband-of-the-Year Nick isn’t doing himself any favors with cringe-worthy daydreams about the slope and shape of his wife’s head, but passages from Amy’s diary reveal the alpha-girl perfectionist could have put anyone dangerously on edge. Under mounting pressure from the police and the media—as well as Amy’s fiercely doting parents—the town golden boy parades an endless series of lies, deceits, and inappropriate behavior. Nick is oddly evasive, and he’s definitely bitter—but is he really a killer?
As the cops close in, every couple in town is soon wondering how well they know the one that they love. With his twin sister, Margo, at his side, Nick stands by his innocence. Trouble is, if Nick didn’t do it, where is that beautiful wife? And what was in that silvery gift box hidden in the back of her bedroom closet?
With her razor-sharp writing and trademark psychological insight, Gillian Flynn delivers a fast-paced, devilishly dark, and ingeniously plotted thriller that confirms her status as one of the hottest writers around.

You might remember back in June, I went to see the XFactor Auditions in Rhode Island.  This week the show premiered on FOX.  Unfortunately, my lovely cable company – CABLEVISION – is in a dispute with the company that provides FOX (and the CW) and because they can’t reach an agreement over money, they have pulled the channel from our cable services.  Pretty awesome, huh?

Fortunately, TheXFactorUSA has a channel on YouTube which posts what I believe to be all the clips of the show (or I should say, what I hope to be all the clips from the show) so I was able to catch up after the fact online. (Cablevision – consider yourself lucky or you’d be getting WAY MORE nasty emails from me…)

On night 1 – Jillian Jensen was on from our auditions.  I posted that I thought at least some of her audition would probably make it to air and I was right! She seems to be getting a lot of press too.

Night 2 had Carly Rose – another one who I mentioned in my recap. She is definitely one of my favorites and I hope that she does well and makes it far in the competition! They didn’t show when Simon made her sing acapella because he didn’t believe it was really her and she also said she had a birth certificate when they were teasing that she coundn’t be 13.

Also from my audition was Patrick Ford.  If I remember correctly he had also auditioned for Idol and said that he had 2 words for Simon which prompted Demi to should out WHERES WALDO! Although I might be getting him confused with someone else who had on a striped shirt. (I kind of wish I took notes because I don’t remember too much now of the minor details)

I’m still undecided if I will be blogging about this show more (If more auditions show up in later episodes I’ll mention that I was there for them) but we will see!  The live rounds start up in November!