September 13, 2012 by ConcertKatie No Comments 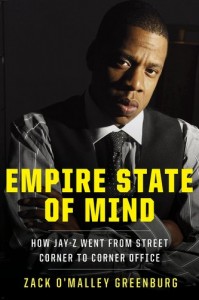 Empire State of Mind: HOW JAY-Z WENT FROM STREET CORNER TO CORNER OFFICE is the biography of rap mega super star Jay Z.  However, this book focuses more on how Jay Z went about building his empire more so than it focuses on his music career.

I don’t closely follow Jay Z’s career, I only know what I read in gossip mags or anything that is big enough to make it to the news (like his ownership of the Nets and moving the team to Brooklyn – that tends to be on our local new a lot) so I was definitely interested in learning more about the guy behind what I find to be the most annoying rap song of all time. (ok, that might be stretching it but I am certainly not a fan of Empire State Of Mind – moreso because of it’s being linked to the New York Yankees than anything else)

The book talks a bit about how Jay Z was able to align with the Yankees in 2009 and how this is just all part of his plans to expand his empire. He has business ventures in various different areas, many of which are making him lots and lots of money.

The book also talks about his relationship with Beyonce and how they were an unlikely pairing in the beginning – Jay Z was on probation when they first met, but somehow they made it work!  It talks about how their relationship evolved and started out with their collaborations, etc.

The final chapter discusses some of the business ventures that landed in Jay Z’s wastebasket. Failed ventures that were either thought about or tried to come to fruition and never did.  This is definitely an interesting read for anyone who is a fan of Jay Z or just interested in how his mind works and how he has become so successful.

I received a free e-copy of this book from the publisher in order to write this review. I was not otherwise compensated for my review.