September 12, 2012 by ConcertKatie No Comments 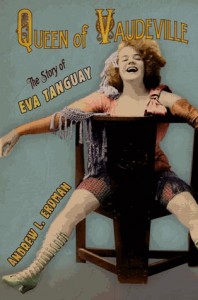 I have a strange fascination with entertainment from the early 1900s (mostly with PT Barnum – love his museum in Bridgeport!) so I figured I would be entertained checking out the book about Eva Tanguay who for a while was the Queen of Vaudeville.

She certainly was a fascinating woman and she definitely had an interesting story. At the end of the book there is her family tree – which is traced back to 1622! I wish I could get my own family tree back that far! (Maybe someday)

Eva got in to vaudeville and performing at a young age and many people developed their acts based on hers.  With the evolution of technology, she is becoming popular again as some videos of her have sufaced on YouTube.  Many other acts from this time vanished “when the curtain fell.” because there was not technology to record their performance so that they may continue on.

There is talk that her niece, Florence, was actually Eva’s illegitimate child.  No one knows who the father was, but it was written off to be the child of Eva’s brother, Adolphe Etienne.  There is no evidience either way with who Florecene’s parents really were.

Another interesting story was about Eva’s dog Stokie.  She loved animals, perhaps more than people.  When the dog was dying she called the vet that was in Brooklyn and told him to come to TN to try and save the dog. He didn’t want to leave his family so Eva told him to bring his wife too.  When the vet got there, there was nothing he could do and the dog died.  But Eva took his heart and kept in in a jar to remember him by before burying him.  (See, she is a bit of an interesting character!)

Eva was engaged twice before her first marriage – a marriage decided on a whim.  Eva later regretted it and they were divorced 5 years later. Her second marriage was to her pianist who was half her age! It was done just as a publicity stunt, but when it does not get Eva the attention she had hoped for, they get an annulment.

At the time of Eva’s death – her estate was worth $584.  Shortly after a movie about her life was made – The I Don’t Care Girl – which is said to not have been an accurate representation of her life.

This was a very well written and thorough biography on a very interesting woman.  It was very interesting to read and I quite enjoyed it.  I’ll have to see if I can dig up any clips of her on YouTube!

In her day, Eva Tanguay (1879–1947) was one of the most famous women in America. Widely known as the “I Don’t Care Girl”—named after a song she popularized and her independent, even brazen persona—Tanguay established herself as a vaudeville and musical comedy star in 1904 with the New York City premiere of the show My Lady—and never looked back. Tanguay was, at the height of a long career that stretched until the early 1930s, a trend-setting performer who embodied the emerging ideal of the bold and sexual female entertainer. Whether suggestively singing songs with titles like “It’s All Been Done Before But Not the Way I Do It” and “Go As Far As You Like” or wearing a daring dress made of pennies, she was a precursor to subsequent generations of performers, from Mae West to Madonna and Lady Gaga, who have been both idolized and condemned for simultaneously displaying and playing with blatant displays of female sexuality.

In Queen of Vaudeville, Andrew L. Erdman tells Eva Tanguay’s remarkable life story with verve. Born into the family of a country doctor in rural Quebec and raised in a New England mill town, Tanguay found a home on the vaudeville stage. Erdman follows the course of her life as she amasses fame and wealth, marries (and divorces) twice, engages in affairs closely followed in the press, declares herself a Christian Scientist, becomes one of the first celebrities to get plastic surgery, loses her fortune following the Wall Street Crash of 1929, and receives her last notice, an obituary in Variety. The arc of Tanguay’s career follows the history of American popular culture in the first half of the twentieth century. Tanguay’s appeal, so dependent on her physical presence and personal charisma, did not come across in the new media of radio and motion pictures. With nineteen rare or previously unpublished images, Queen of Vaudeville is a dynamic portrait of a dazzling and unjustly forgotten show business star.