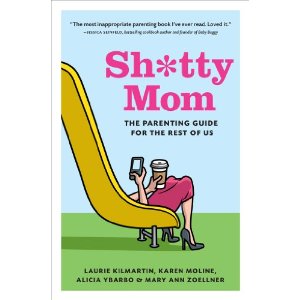 I don’t have kids and I don’t really ever want to have kids (although this book teaches me that not wanting them does not prevent me from having them, hmm..) so I am probably not the one who should be reading this book, but from the write up it seemed funny so I had to check it out. (I worked at Toys R Us in high school and college so I’ve seen my fair share of sh*tty moms (and dads)).

The book is  relatively short, under 200 pages, but it covers a LOT of different topics and in an amusing way. I liked the section that said “Things that other people love more than you love your kid” and one was “A Belieber and Justin Bieber”, that definitely cracked me up for a bit longer than it should have! (In the chapter about non moms who think their dog is their child and they love the dog more than you love your child)

I also thought it was funny in the chapter about finding a babysitter. It mentioned to decide how important it is that your sitter knows the difference between “their and “they’re”.  To me now, it seems important.  After reading this book -I found out that my attitude really should be –  if the sitter shows up on time – nothing else matters. (And here I thought I was a good sitter because I know the difference AND am on time.)

This book was definitely a fun read, even though I am not a parent and I think for those of you who do have kids it will be even more amusing so I definitely recommend it for anyone looking for a fun, quick read about how much people can’t stand their children.

Sh*tty Mom is the ultimate parenting guide, written by four moms who have seen it all. As hilarious as it is universal, each chapter presents a common parenting scenario with advice on how to get through it in the easiest and most efficient way possible. With chapters such as “How to Sleep Until 9 A.M. Every Weekend” and “When Seeing an Infant Triggers a Mental Illness That Makes You Want to Have Another Baby,” as well as a Sh*tty Mom quiz, this is a must-have, laugh-out-loud funny book for the sh*tty parent in all of us.